Guardian All Ears 30th May 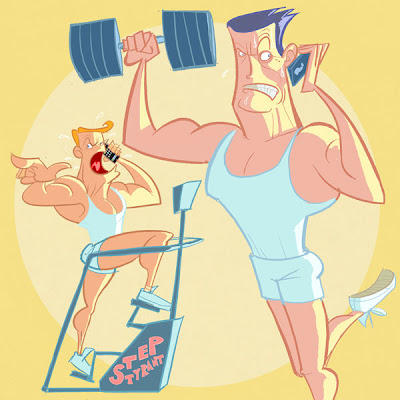 (article by Michael Holden)
Staying in a hotel and running out of ideas, early one morning I went to the gym hoping that the place might be empty. It wasn’t. As I came to terms with the unfamiliar and antequated fitness equipment and tried to visualise a routine that wouldn’t make me appear flimsy or idiotic two other men were well into their rituals, both of them were on the phone.
Man 1 (setting his handset aside to bark at an employee who had strayed into the room) “Are they’re any more towels?”
Worker: (wihout hesitation or concern) “No.”
Man 1 (into his phone, darkly) “This place is insane.”
Man 2 “If it’s anywhere it’ll be in the drawer of my desk. The big drawer. On the right hand side.”
Man 1 “I’m on the stairmaster, that’s why I’m panting...”
Man 2 “Keep looking.”
Man 1 “I need the entire schedule, not just mine, I need everything pertaing to everyone involved.”
Man 2 (voice straining under the weight of a dumbell in his other hand) “Keep looking.”
Man 1 (on the periphery of a tantrum) “I don’t care about that. Don’t mention it. It’s irrelevent. I don’t need to think about those things. Don’t bring them to me. It’s your job to resolve them.”
Man 2 (staring with admiration at the weight he moved) “Get Geoff to look, Geoff will find it.”
Strange, I thought, how these folk come here to work out while staying so relentlessly connected to others who are doing work for them. It was 6am. I felt wearied by the notion of what they might have acheived by lunch. 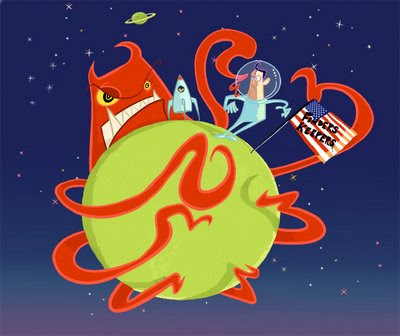 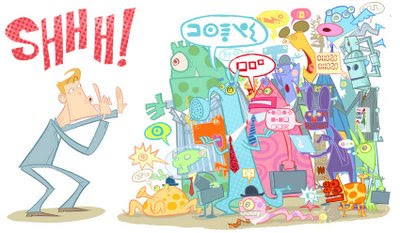 Just finished this for 'Communicators in Business' magazine - commissioned by the lovely Amelia who always seems to manage to pull out fun jobs - any excuse for monsters!
Posted by Steve May at 12:53 0 comments

Guardian All Ears 23rd May 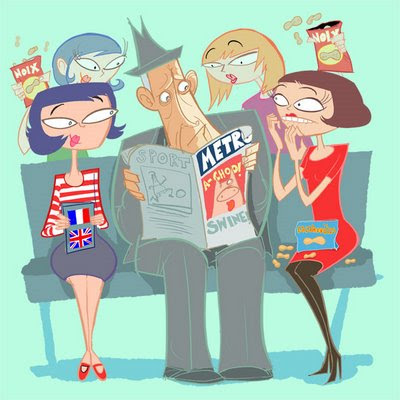 ...I know all french teenagers don't have Amelie haircuts but what's a little bit of light racial stereotyping between friends...?

(article by Michael Holden)
I was in the corner seat at the back of the upstairs of a bus that steadily filled with passengers. Initially there had been just me and another man opposite and I watched him bury his head in a free newspaper as the seats around him filled up with teenage French girls. Oblivious to his predicament he read on as the girls talked among themselves and looked through an English/French dictionary before finally presenting the traveler with a question.

Man (dropping his paper and looking out suspiciously at his interrogators) “Yes?”

French Girl 1 (slowly and carefully) “Do you know, which are the good parks, for feeding squirrels?”

The man looked seriously at them now, as though wondering whether this were some sort of joke, sensing this, one of the girls began to mime eating a nut, in the manner of a squirrel, but with a look of complete sincerity.

French Girl 1 (handing him a pen and paper) “List the parks.”
Man (unsettled further by the sustained gravity of the matter Well, like I say they’re all pretty good, for squirrels, I mean, hmmm.”
He made a list of four large parks in the city, good choices I thought, and then handed back the pad. The girls looked at the list approvingly. He went back to his paper, but you could tell things weren’t quite the same. 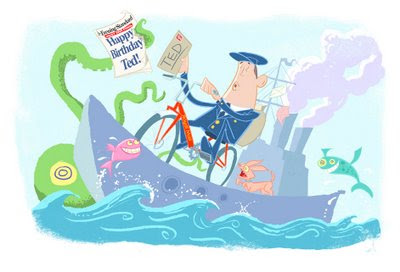 Have never drawn a 90th card before (he worked as a postman, sold the Evening Standard & was in the Navy in the war ..phew!)
Posted by Steve May at 23:30 0 comments

Guardian All Ears 16th May 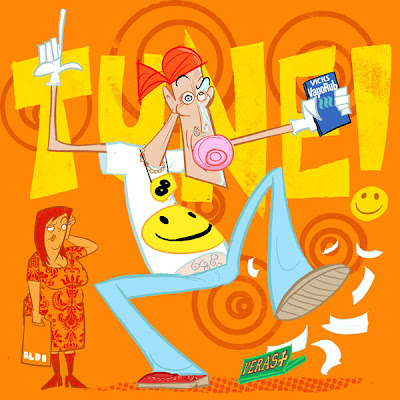 Hmmm - men of a certain inclination & demographic... it's a fair cop!
In mitigation I'd like to point out I never wore white gloves, bandanas or bought Vick's Vaporub - as for Smiley t-shirts - wasn't it only undercover cops & Daily Mail journalists uncovering 'this evil Acid cult' that wore them anyway?

By inclination and demographic I am drawn to the concerns of men who can’t quite believe that they are now, irrefutably, adults. I was fortunate then to find myself sharing a bus with two such characters, probably in their early 40’s, one of whom had an urgent confession.

Man 1 “I hadn’t heard this tune in 15, 20 years. But I was obsessed with it like, back in the day. So I’m finishing my lunch and this bloke in the bar, setting up for the evening, sticks it on..”

Man 1 “Innit? I tell you mate a fucking chill went down my spine. I thought I was dreaming, then I’ve gone up and I’ve told him how I used to love this song but I never knew what it was and all of that.”

Man 1 “Well he’s loving it. He’s one of us of course, went to all the same do’s. So I got on the fucking Internet, and this is the thing, you can buy it, just like that. Three days later the things come through the door except it hasn’t. The postman’s left it next door, they’ve given it to the wife so when I get in she’s got the envelope and wants to know what’s what.”

Man “Well I’ve told her, but there’s no way I’m sticking it on while she’s in ‘cos she’ll say something, start taking the piss. So I’ve waited till she’s gone out and wallop, I’ve cranked it up.”

Man 1 “It was fucking awesome mate, like time travel. It made me wanna get right on it.”

Guardian All Ears 9th May 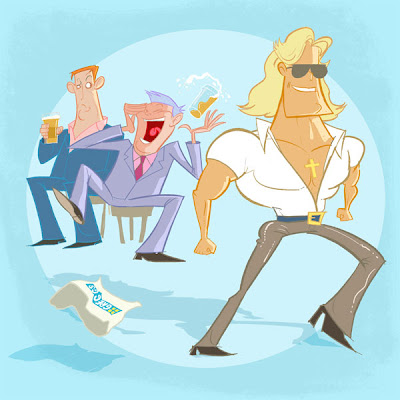 Big up for Greggs the bakers & sorry Darryl Hall, I think I've stolen your hair this week - but WHAT HAIR!!!!

Outside a pub I watched two men slouch across a picnic table. The first man was sober, his posture a consequence of fatigue perhaps. The second, through well dressed and affluent was on the cusp of being completely plastered, a stare of affairs that clearly caused his companion some concern.

Man 1 “How long did you stay off the drink for.”

Man 2 “Three days, more or less. Well we had some Rose on the third day. It was the kid’s birthday, that didn’t really count. Then I had a meeting this morning, had a drink after that, sat outside. Bumped into Chris, had some lunch. Popped over the road and now here we are.

Man 1 (looking at his own drink as though reckoning his own worthiness to pass judgement) “Well, best make this the last one then, for today.”

Both men laughed a little, then settled down. Next, a man with a preposterously developed torso and open necked shirt strutted past. He looked ridiculous, an antiquated stereotype reborn. Other people at the pub laughed discreetly at him, the drunk man laughed loud enough for them all.

He pointed at a paper sack that was blowing down the street while his mate looked at him in some despair, seeing that his friend had attained the mindset of a veteran street drinker, even if he still had decent clothes.

Guardian All Ears 3rd May 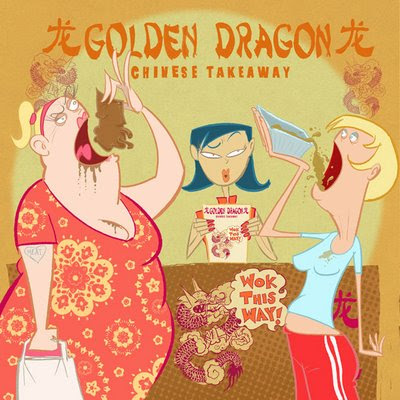 (article by Michael Holden)
As warm weather breeds inertia so that inertia breeds an increased reliance on takeaway food, at least in my world. I was just inside the door of my local Chinese when the two women ahead of me continued a dialogue that was so off putting you could have written it down and sold it as a diet.

Woman 1 (Staring out the window, considering what would follow) “I won’t have any of the meat. I’ll just have the juice off of it.”

Woman 2 (Somehow blind to the disturbing nature of the suggested image) “Right.”

Woman 1 “How come we’ve come in here, instead of ordering it on the phone?”

Woman 2 “If you want it delivered, it’s an extra pound, if the order’s less than fifteen quid.”

Woman 1 “You ever use the one in Mile End? They do the delivery.”

Woman 2 (unaffected by these revelations) “Right.”

Their food was ready and they accepted it in great steaming bags while the woman behind the counter read out their order in confirmation.

Woman 1 (anxious to head off any misunderstanding) “Like I said, you have the meat, I’ll have the juice that it sits in.”

They left and I tried to place my order, but the menu seemed to have lost its appeal.