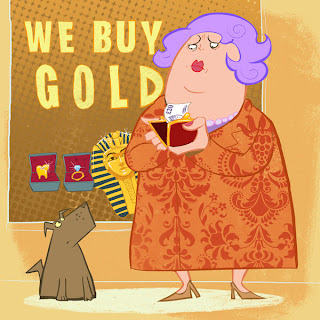 It was a scene of quintessentially British misery-a train delayed for no explicable reason in the driving rain. As I stared at the seat in front of me trying not to consider what proportion of my life had been spent under such circumstances I became aware of what the women sat across from me were saying.

Woman 1 (as though finally admitting something of great magnitude) “It was my niece that made me think about the wedding ring. She asked me if I still had it and I realised I had kept it-I don’t know why I had.”

Woman 2 “We don’t know why we do things sometimes do we? We’re a mystery to ourselves.”

Woman 1 “It was a few weeks before I dug it out. Wimbledon was on the telly, I remember that much. I tried it on, it still fitted. Then I saw a shop that said “We Buy Gold” so I took it in. they weighted it up in this sort of alchemist’s balance, she said it was worth £26 to them. Well, I thought, it’s better that than nothing. So I took it.”

Woman 1 “They had some others too, platinum and white gold…” 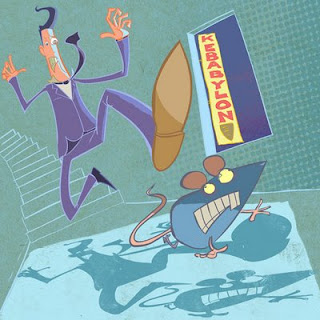 I live nearby a kebab shop of such repute that people actually go there and eat at tables on purpose when sober. In was waiting for a takeaway when a man limped in and joined another at a table.

Man 2 (slightly ashamed) “I tripped over the cat as I was coming out. Fell down the stairs.”

Man 2 “I will be in a bit. Done some painkillers.”

Man 1 “Similar thing happened to me. Went to my sister’s the other day and they’ve painted all the doors the same colour, so I end up going to the wrong flat. I’ve realised and jumped down the stairs to go next door but before I hit the ground I see this-thing-come into my vision moving the other way. And I realise I’m gonna land on it.”

Man 1 “Well, I’m mid-air, so there’s not much I can do. I try and take my weight off the foot, but I hit it anyway. You should have heard it. Horrible sound. I don’t like rats at the best of times, so I’ve screamed too.”

Man 1 “No, it wasn’t that bad. It ran off, but I was scared so I ran too. For a while we were both running in the same direction, side by side. It was mental. It peeled off in the end. But, I tell you, I can hear it screaming still.” 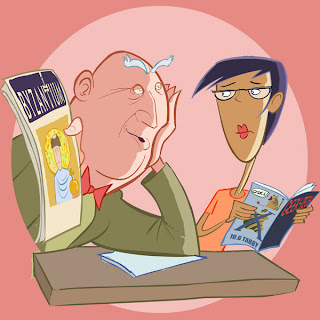 Got slightly carried away with computer geek magazine detail - predicting the new feline themed Mac OS X version - remember I got there first!

I spend enough time in my local library to know by sight the others who do the same and I recognize and respect the hierarchy that exists there, especially among those who have nowhere else to go. Their leader is a bald man, in his sixties perhaps, who can read a single newspaper for up to eight hours. He seldom speaks, except to remonstrate with those who break his self-inflicted protocols of behaviour. The other day though he began almost flirting with woman half his age who was reading a computer magazine at his table.

Man (realizing they were both staring at the rain) “Time to go somewhere else perhaps. Like Morocco.”

Man (showing her the weather reports in his paper) “It’s warmer there, see.”

Man (pointing out a news story) “Did you see this? A pensioner 86, I think, confronted these two robbers. They probably went into shock, people don’t expect it, I mean once you're that age they pretty much write you off, nobody expects anything from you.”

The woman nodded, but her smile seemed more laboured.

Man (pointing at the story again) “Look I was right! They fled in shock, and there were about 50 people standing there doing nothing, the usual story.”

Man (noticing an advert on the same page) “Are you planning on visiting the Byzantine exhibition at the Royal Academy?”

Man (unphased) “Well, I guess, these are things from the beginning of history, you're young. There would be no point in you going anyway.”

I love a bit of 'motivational speak' - I wonder if I'll ever make employee of the month?

I was in an especially busy city centre branch of a multinational burger chain trying to soothe my brain with saturated fats and staring out the window when I heard a repetitive cry, rising above the background of everyday bedlam.

When it didn’t stop I turned round to check what was happening and was surprised to see the sound came from the franchise manager, a small man who leaped up behind his staff like a fat salmon in an attempt to take an order from the crowd of punters who seemed far too alarmed by the noise he was making to take up his offer of assistance.

There are few situations in life where someone screaming the word “Now!” makes things any better so it was a relief when he developed a new refrain.

I watched the staff, the button was clearly metaphorical, but it worked. People got fed.

Manager: (wild, victorious, still yelling) “I told you I was in Beiing! We can do this! Motivation! Now!”

When the crowd departed so did he, he had tears in his eyes, or maybe congealed fat, I couldn’t say. 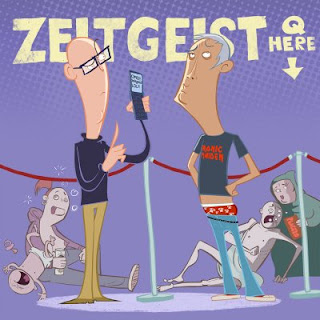 
(Article by Micheal Holden)
Queuing for an art exhibition I was distracted from the disparity between my expectations of what I was waiting to see and the tedium of the wait itself by the men behind me whose conversation seemed calculated to impress what they must have assumed was a learned audience.

Man 1 “You could go and see an original Hogarth, but I mean really, what are you looking at, it’s a print. The guy was an engraver.”

Man 1 (anxious to display affinity with another subject) “Hmm…did you hear about the recent research on pharmaceutical copyrights? They told half the sample matrix they were taking branded American drugs and the other half they were using third world copies. Everyone reported better results with the American one, but of course, they were all placebos!”

Man 2 (not to be outdone) “What about Formula One? They say they’re cutting down on their emissions, but, think about it, they actually (+I)fly(-I) cars around the world!”

Man 1 (looking at sign on the gallery wall) “How many memberships do you think they need to sell to break even?”

Man 1 (all knowing) “Well they can create more problems than they solve.”

Man 2 (annoyed that he had lost his friend’s full attention) “What are you doing?”

Man 1 “Sending a text to Zoe. I’m being self deprecating. How do you spell zeitgeist?” 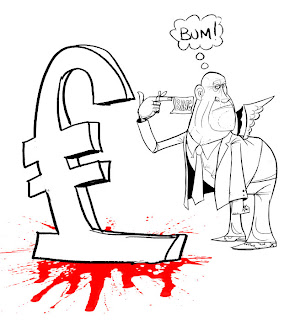 My nonsensical take on all recent things financial inspired by trying to avoid finishing some other work & haphazardly answering a friend's brief for a book cover (she has sensibly ignored my 'advice')
Posted by Steve May at 10:48 0 comments