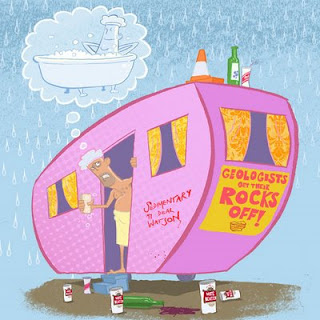 (thanks to Anthea for Geology based pun inspiration!)

Crossing the country again on another train I leant back my head and tried to imagine I was going somewhere new when I fell into earshot of the people behind me who seemed to be newly acquainted by occupation and in the process of discovering what else they might have in common.

Woman: “I was doing geology…”

Woman: (laughing) “I know, one day you’re doing geology and the next thing you’re a physicist!”

Man: “So, you must have done the old ritual drink up when you were there?”

Woman (rueful, experienced): “It’s the second day that gets you…but I’ve had some good times on that pub crawl. You can get away without spending anything.”

Man: (conceding that not paying for drinks can make drinking seem more worthwhile): “Tell me about it! Pure carnage. But it was more geology the geophysics in the end. I was quite surprised.”

Woman: “Where did you end up?”

Man: “Outside Dublin, in a caravan.”

Woman: “You did well, we never went anywhere that far.”

Man: “Does the company fund trips?”

Woman: “ You’ve just missed out actually, we just did the Jurassic coast. At the other company we just used to stay in a hostel, but with the new one…well it wasn’t exactly luxury, but it’s posh, you had your own bathroom. Stuff like that doesn’t worry you at college but once you’re working you think, hang on, I wouldn’t mind my own bathroom. So, that was good.”

Woman: “A good mixture, Geo physics has a bigger spectrum of people than geology.”

Man: (as though affirming one of the great unassailable truths of existence) “Absolutely. Every time.” 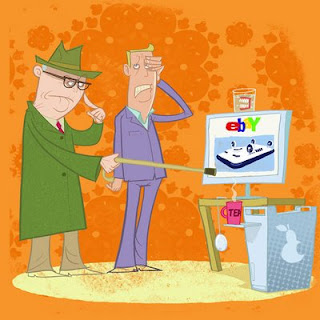 I was queuing to buy a ticket at a railway station for some time when a man appeared and apologised for the extended delay and said that it was due to a systems failure.
Typically, no one in the line confronted him about what that might mean, but as soon as he had gone everyone starting whining about it, especially the two restless business types behind me.
Man 1 “Unbelievable!”
Man 2 “Computers though, innit? We’re at their mercy.”
Man 1 “My old man just got one.”
Man 2 “How old is he?”
Man 1 “He’s 80.”
Man 2 “What’s he want with a computer?”
Man 1 “I hate to think. Whatever he wants it for it’s my problem now. I showed him the basics, he acted like he understood. But he knows literally nothing: windows, update, delete, it’s all brand new.”
Man 2 “Well it can wind you up the best of times, the old IT.”
Man 1 “As soon as he told me he’d got one I knew it would be a nightmare, but what can you do?”
Man 2 “Say you don’t know nothing about ’em!”
Man 1 (aghast) “Whoa, no, you can’t do that! Someone’s taught you how to walk and talk and wiped your arse, you can’t turn round and act like you can’t help ’em figure something out.”
Man 2 “Yeah, but still, come on. It’s not your problem is it?”
Man 1 “Of course it is!”
Man 2 “What, so if your old man bought… a hovercraft…”
Man 1 “I’d be straight round.”
The other man looked at him hard, as if his theoretical availability in a potential hovercraft/father scenario had made him see him in a new light • 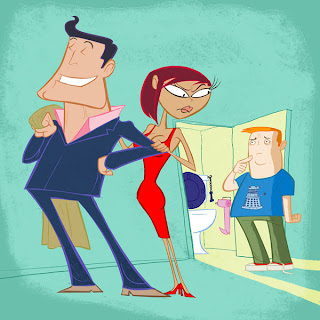 Don't ask me about the Dalek, I just like them OK?

I left a party, to have a smoke with the assembled lung worriers outside just as one of them was loudly lamenting the mixed blessings of his newfound single status.

Man 1 (holding a beer bottle in much the same as way aggressive preachers deploy their bible) “I had no youth, right? If you think about it I totally missed the whole freedom thing. I was with her for ten years. So this is all new to me. I’m like, what the fuck are you gonna do?”

Man 2 “Well what are you gonna do? You’ve got your own place, just go nuts, really go for it. I would.”

Man 1 (forlorn) “It’s not that clean cut though is it? I just don’t know what to do. You talk to women and then what happens?”

Man 2 “If they like you they sleep with you and if they don’t they won’t. It’s the same as before”

Man 1 “The guy I share the flat with, he’s really handsome, a ridiculous looking bloke, like an advert or something. He’s got these women coming all the time.”

Man 2 “Well you can clean up in his slipstream then. Is he thick?”

Man 2 “Well they’ll get tired of him and then you move in, acting clever.”

Man 1 (annoyed at the lack of a more realistic proposal) “There’s more to it though, he doesn’t flush the toilet. And these girls, I know they’re gonna think it’s me.”

Man 1 (face falling as though visualising the issue a little too clearly) “Yeah…I am.” 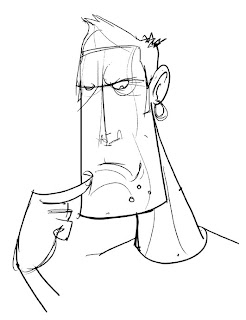 Seem to have developed the complexion of a 15 year old overnight which is faintly distressing - must be too much good living or similar
Posted by Steve May at 12:40 0 comments 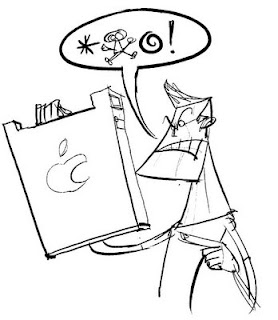 Portrait of the artist mid crash-tantrum! Horrible sense of déja vu while one redraws everything from the last half hour...grrr
Posted by Steve May at 11:49 1 comments