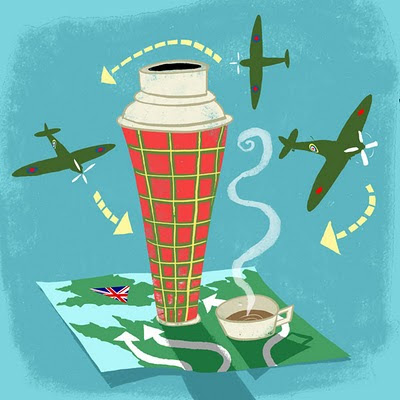 'Who do you think you are kidding'...etc.
http://www.guardian.co.uk/culture/2010/jun/26/michael-holden-all-ears-flasks#
(Article by Michael Holden)
It might sound obvious, but the further you venture from the beaten track, the weirder things become. It was a point made clear to me recently at an air show – the first one I'd been to in over 30 years – where I saw a couple doing something else I thought had stopped in the 1970s – drinking from a flask.

Man (smiling as his wife poured coffee) "That smells nice."

Man (suddenly unhappy) "What does that mean? Is there a certain smell, like a continental smell?"

Woman (perhaps seeking through repetition – or some form of Jedi mind trick – to negate his enquiry) "It's continental."

Man (having none of it) "It's just one of these made-up words though, isn't it? 'Continental'. Coffee comes from South America too."

Woman (plaintive, hopeful) "I guess it smells like the continent?"

Woman (hopeful) "You smell coffee more in Europe, on the continent. Here you just smell tea."

Man (considering it) "I don't even think you can smell tea. Can you smell tea?"

Woman "Of course you can. If you can taste something then you can smell it."

Woman (having had enough now) "Look, I don't know. If you don't like it, don't drink it. Pour it back in the flask."

Woman (shouting over the sound of a Spitfire) "Duly noted."

Labels: All Ears, flask, spitfire, steve may, the Guardian 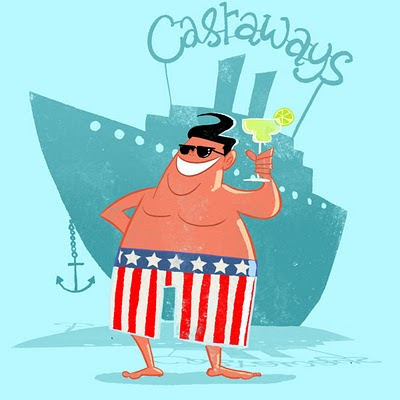 I've uploaded some new sketches from a recent trip to Kenya which you can see here - http://kenya-sketchbook.blogspot.com/
Posted by Steve May at 15:55 1 comments

Guardian All Ears 22nd May 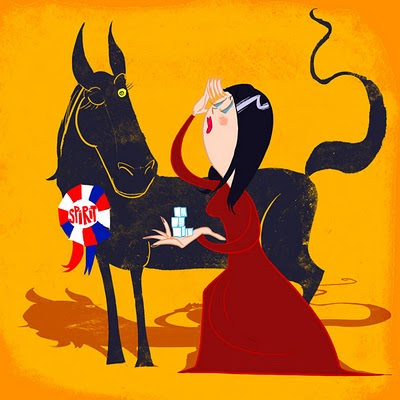 This is from a couple of weeks back - in the meanwhile I've been looking at donkeys, lions, elephants & assorted monkeys amongst other things in Kenya & am now attempting to slot myself back into 'work' mode
(Article by Michael Holden)
In a place where I sometimes eat breakfast they like to have the radio on, with a talk radio station blasting out loud. One morning, though, the wireless was silent and the other patrons took up the mantle of white-hot contemporary debate themselves.

Man 1 "What did you make of that Derren Brown thing?"

Man 2 "Look, if a bunch of people in Liverpool want to think that their dead relatives are looking out for them, then what's the problem with that?"

Man 1 "I reckon psychics and that are like the BNP. Half of them actually believe it, and the others are just looking for something to do."

Man 2 "I knew a lass who reckoned she could do all that. She'd say, 'When Spirit comes to me', not 'the spirits', or 'the spirit world'. It was always just 'Spirit'. 'Spirit told me this were gonna happen …'"

Man 2 "Really? Then psychics are the least of your worries. It's all about the money, mate. Look at capitalism. You're being encouraged to participate in an imaginary future by systems that profit from you taking part. You tell me the difference."

Man 1 "Is that why you're out of work, you're like a conscientious objector?"

Man 2 "Partly that, and the criminal record."

Man 1 "You're upfront about that?"