Publication Day for Two Terrible Vikings - Feast With The King 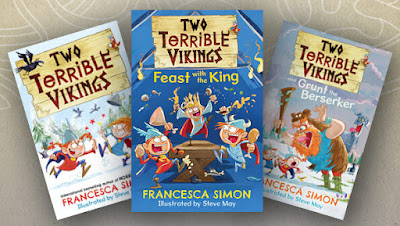 It's publication day for the THIRD in the Two Terrible Vikings series 'Feast With The King'
As ever I loved working with the brilliant 'Queen of Comedy' Francesca Simon who imbues these books with so much energy & humour!
Published by Faber Childrens

Hack and Whack babysit a toddler – Fire Hazard – and discover to their horror that they might not be the worst vikings in the village after all . . .

Then they manage to secure an exciting invite to feast with the visiting king, but discover that it’s three days of having to be on their best behaviour . . . Until the new teenaged king turns out to be a lout – food fights ensue, and he loves them.

Unfortunately, that’s when the snotty, privileged, wealthy winter guests turn up – distant cousins who can’t be turned away. They make everyone’s life a misery – can Hack and Whack find a way to get rid of them?

Packed full of humour that children will love and illustrated with anarchy by the fabulous Steve May. 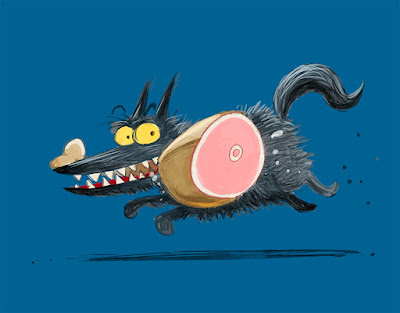 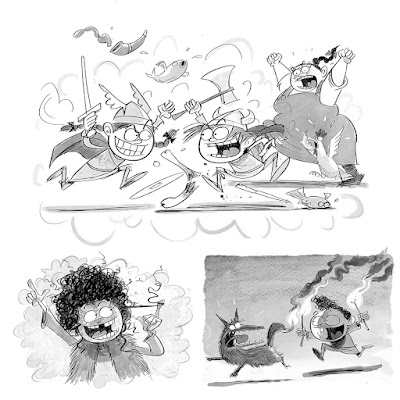 Friday in the Smith household 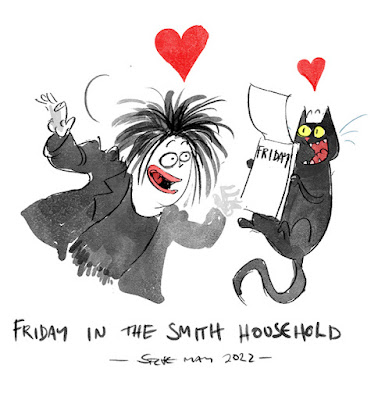 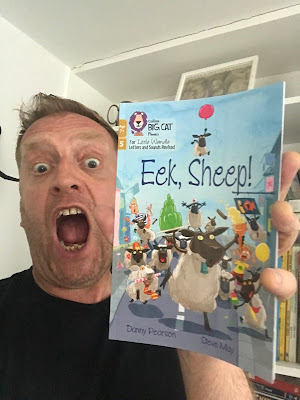 'A community is thrown into chaos as a flock of hungry sheep take over the local town and cause mayhem! All the people want to do is live in peace once again, but who will be brave enough to stand up to this wacky woolly army?'

You can order a copy here! 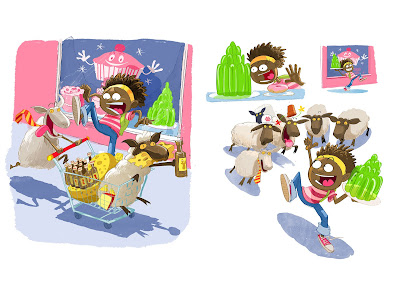 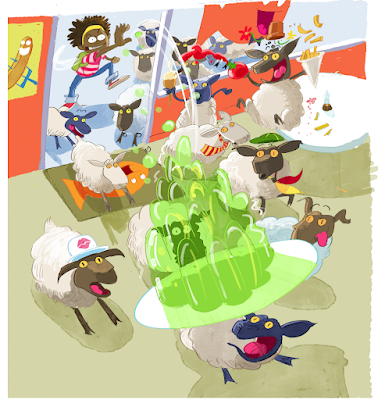 (I TOLD you there'd be plenty of jelly!) 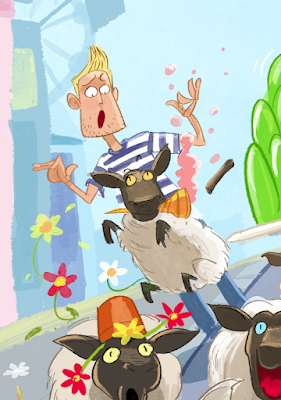 (You might just find a certain illustrator lurking on the cover too if you look carefully!)
Posted by Steve May at 14:53 0 comments 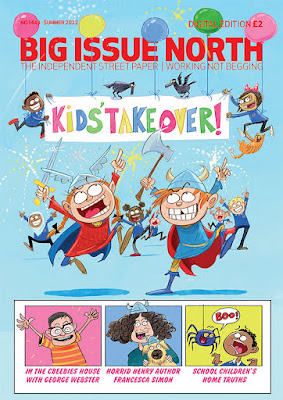 Very pleased to have illustrated the cover for this week’s kids’ takeover edition of Big Issue North Big Issue North featuring interviews with Francesca Simon & CBeebies‘s George Webster. It will be sold on the street for a week and vendors will have the option to sell it with the usual mag - it’s also available digitally on the Big Issue North online shop.

Phew! What a scorcher! 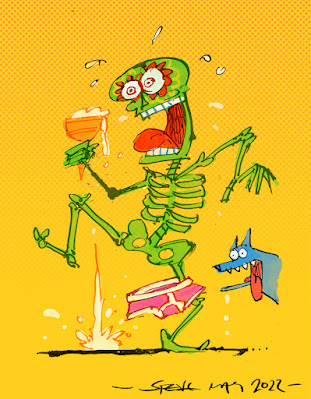 'When it gets too hot for comfort
And you can't get an ice cream cone
T'ain't no sin to take off your skin
And dance around your bones'
Tom Waits
Posted by Steve May at 17:59 0 comments

Grunt The Beserker - behind the scenes... 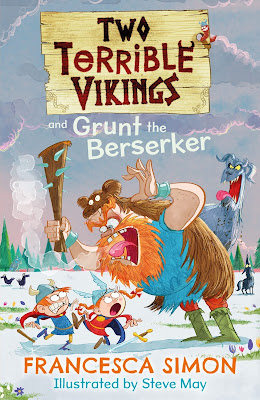 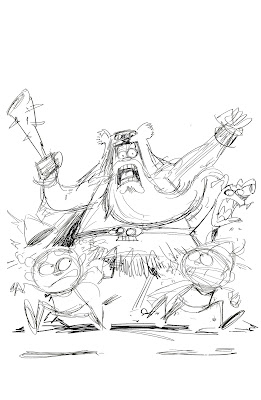 This was my very first version which I cleaned up a bit... 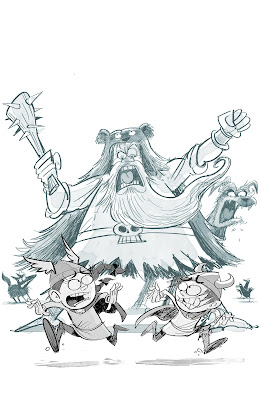 ...to this which went over to the people at Faber - we all thought it looked a bit too scary so I gave it another go & rejigged the format to make it a bit clearer 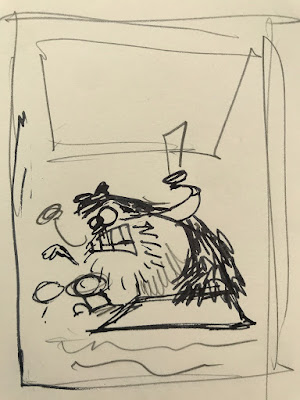 I decided it would be less cluttered if Hack & Wack were separate from the terrible Grunt Ironskull so I doodled this in the back of my sketchbook... 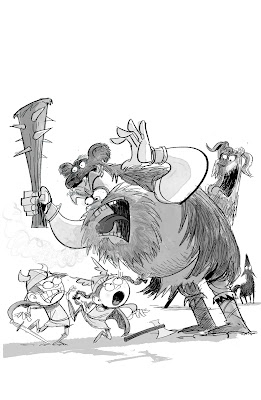 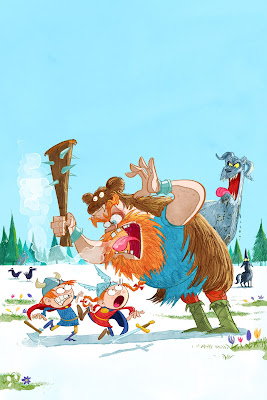 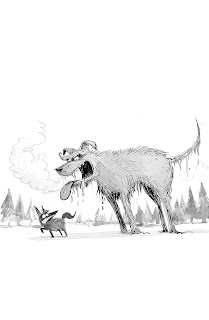 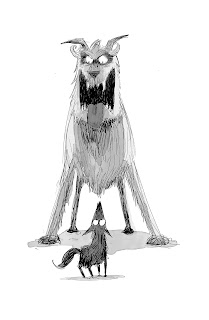 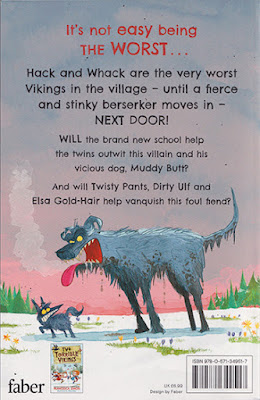 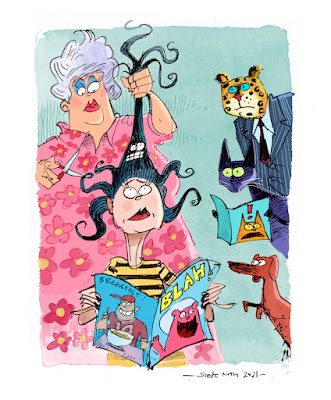 The perils of living hair!
Posted by Steve May at 14:02 0 comments