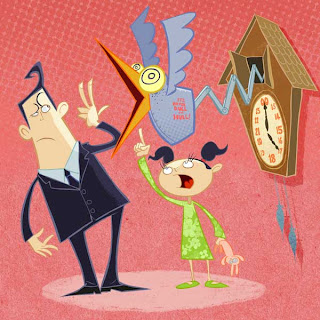 Hmmm...had to draw cuckoo clocks in two separate jobs this week...must be something in the air!

In a department store I queued for the till behind two men-colleagues on their lunch break I assumed-who were buying some lamps. As we waited for the lone employee to return from some errand I could see one of the men eyeing the display of clocks on the nearby wall.

Man 2 (baffled): “What like, and a cuckoo actually comes out of it.”

Man 2: “Had he been to Switzerland or something?”

Man 1 “No, no. He’ll have got it from somewhere in Hull. It’s not even much of a cuckoo. It’s just like a beak that comes out.”

Man 1 “Oh yeah. I was round there with me daughter just after he got it. He says to her, ‘At five O’clock a little bird will come out.’ And I say, ‘It’ll cuckoo five times.’ Anyway, five O’clock comes and the thing goes nuts, keeps coming up, my daughter wants to know what’s going on. Then I’ve realized, it’s on 24 hour whatnot.”

Man 1 “Aye. But I wanted to be sure. So I waited for an hour to see if it came out 18 times, but my dad said something to me and I lost count.”

Man 1 “Well I wasn’t hanging about for another hour, but I figure that must be what’s going on.”

Man 2 “That must drive your dad mental.”

Rabbit strewn Phantasmogoria with a cheeky nod to Ed D Wood - bless his soul!
Posted by Steve May at 11:15 2 comments 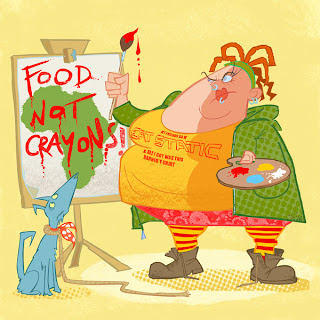 This week I just wanted to concentrate on the 'dog-on-string-soap-dodger' angle as I've been on the end of so many worthy but absolutely clueless self righteous rants from folk addled on cheap cider & cock awful 'tribal psy-trance' bollocks!

I was in a café sat adjacent to two girls and man in their mid twenties who would once have been described as “crusties,” though they presumably now enjoy some more contemporary title. Either way, matted hair and willful squalor was the overall vibe as they discussed their disappointment following a recent charity event.

Woman 1: (annoyed) “All that money at the gig that they collected they said it was going to Africa, right? That was the whole point.”

Man: (quite exited at the thought of some wrongdoing) “No-you’re gonna tell us they nicked it?”

Woman 1: “No, but get this. They flew there on a plane! They got three returns to Africa out of it.”

Woman 2:(sensing something wrong in this but unable to find words to express exactly what) “Wah!”

Woman 1 “Yeah, so they got there and then it turns out they were just taking them art supplies, no food!”

Woman 1 “You know what I’m saying? This is Africa innit, take some tins. Take art supplies but come on, get your priorities sorted, take some food too.”

Man (forming what he evidently assumed was a lucid vision of the mechanics of global charity) “You can imagine the disappointment of the people that are hungry. When those three got off the plane-imagine the kid’s faces. They would be expecting some grains or something, and all they have is like…easels and shit.”

Woman 2 (moving on) “What are you doing later?”

Woman 1 “I’m gonna go on line and look for a trip hop night.” 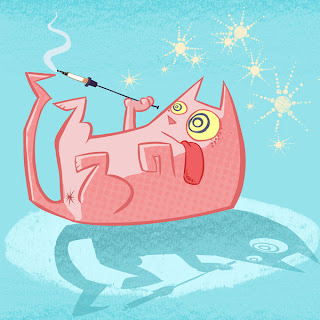 This week's copy...ruminations on cat indolence...

I arrived at an airport with several hours to spare and having made it to the departure lounge without let or hindrance and not consumed by the urge to buy a foot long Toblerone or try and win a car in a raffle there seemed little else to do but repair to the hideous “pub”. This proved a popular option and soon I was sharing a table with a couple fretting about their abandoned pet.

Man “I worry about him.”

Woman “ I dunno why, it’s not like he’s gonna get into a trouble, he never does anything when we’re there, I don’t imagine he gets up to much when we’re away.”

Woman “You never know what? You think it’s gonna have some friends over and wreck the place?”

Man (as though revealing a guilty secret) “They get lonely”

Woman “He’s too lazy to be lonely.”

Woman “The other day I was watching him and he was staring straight at the sun. I couldn’t figure out why an animal would do that and then I thought-perhaps it’s easier than dilating your pupils, perhaps it’s his way of doing even than less than he was doing anyway-which was nothing-just lying on his back looking at the sun in the sky.”

Woman “Don’t even start with the Egyptians, they built the pyramids. You worship a cat and you won’t even put up a shelf.”
Posted by Steve May at 10:51 0 comments