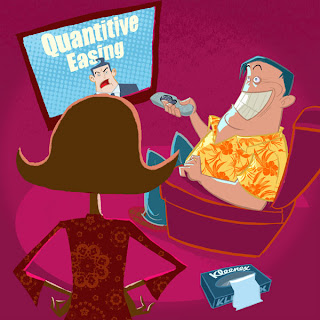 I was in a large public building eating a sandwich at a group of tables occupied only by myself and the maintenance crew of the place who were enjoying a moment of collective leisure and discussing the covert self abuse techniques of someone they all new.
Bloke 1 (as though what followed were a scheme of great ingenuity)“She goes to bed and he says, ‘I’m staying downstairs to watch a programme,’ then he slips the DVD on. If he hears the stairs creak and she comes in, he flicks over to a documentary.”

Bloke 2 “Have you seen Dom though? He’s open about it. He’ll buy ‘em with her in the pub, I’ve seen it. The DVD bird’s come in and he says, ‘got any porn?’ She says, ‘ain’t you got enough at home?’ He asks her which one she fancies and she says ‘I don’t watch ‘em, I don’t care!’”
Bloke 3 (allowing the laughter to subside) “Who’s on Tuesday-Wednesday?”
Bloke 4 “When does Alan swap with Ursula?”
Bloke 1 “Tonight.”
Bloke 4 “The night shift bores me to tears.”
Bloke 1 “He loves ‘em. I’d rather do Saturday.”
Bloke 4 “Now, is he a shy person who prefers his own company, or is he a bit weird?”
Bloke 1 “He’s a bit weird.”
Bloke 2 (as though this might explain something) “I heard his dad was Lithuanian.”
Bloke 3 “He ignored me, and Tottenham won yesterday. When we were struggling he would talk to me more.”
Bloke 4 “He has put on a bit of weight.”
Bloke 3 “Yeah, but that’s no reason not to talk to someone.”
There was a lot of quiet nodding about that. Evidently Alan had better loosen up if wanted to get along.