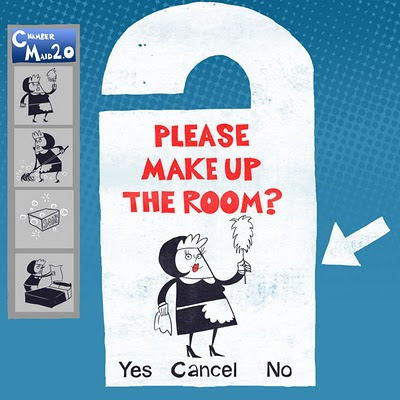 as they say...It's all done with computers these days, I just press a button then f*** off for a massage & a cocktail usually...
http://www.guardian.co.uk/culture/2010/sep/25/michael-holden-all-ears
(Article by Michael Holden)
It was All Ears' good fortune to be in New York last week, feeding bread into a rotary toaster at a breakfast buffet, when two young lions of the leisure industry – all shirts and laptops – joined the queue behind me.

Man 1 (clearly in awe of his subject) "We have quarterly meetings, and he's nothing but questions."

Man 2 (of the same opinion) "That's why these guys are who they are. He was an account manager at Morgan Stanley. They see things we don't see."

Man 1 "He's way down in the weeds. We were meeting and he starts asking how the chambermaids know when the room is checked out."

Man 1 "That's what I'm talking about. He doesn't have to worry about that."

Man 1 "Exactly. These guys are spinning stuff around and we don't even feel the motion."

Man 2 (rightly puzzled) What do you mean?"

Man 1 "You can't learn that shit. It's instinctive."

Man 2 "About the chambermaids."

Man 2 "Don't they just knock on the door, or phone the desk?"