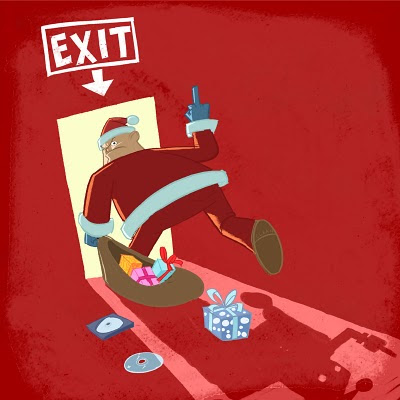 Reverse Santa...see what I did there? Not my cleverest one I'm afraid! (faintly odd drawing Santa outfit in August while preparing for Carnival too)
http://www.guardian.co.uk/culture/2010/sep/04/michael-holden-all-ears
(Article by Michael Holden)
In a coffee shop on Saturday, two men were catching up on what they'd been up to during the week. The question of their attendance at the party of a mutual friend came to dominate the agenda.

Man 2 (smiling, untouchable) "I was in Germany."

Man 1 "Well, I bailed out early. With a crowd like that you know what you're in for. It's terrifying, really. Blokes who've been at it for over 30 years, some of them with their sons now – who look just as mental …"

Man 1 "Shit, as always. But they took the money off you at the door. I tried to get as much of it down as I could to get my money's worth. And then later on the drugs are kicking in and no one's interested. Piles of it just sitting there."

Man 1 "You bring someone a present, they don't look at it and just chuck it in a sack and fuck off at the end of the evening."

Man 2 "And that's the reverse Santa?"

Labels: All Ears, reverse santa, santa, steve may, the Guardian