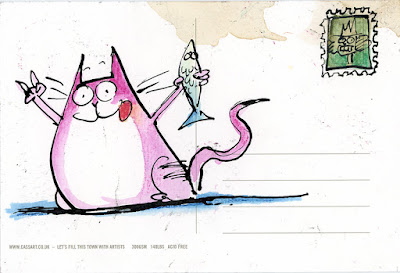 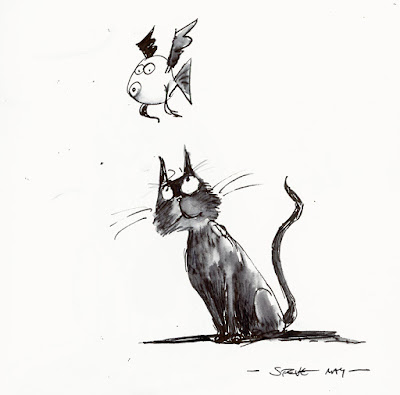 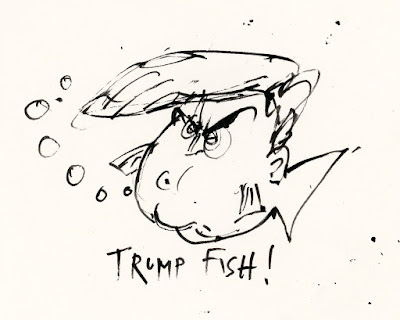 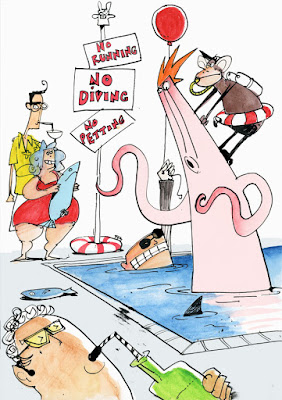 No running, no diving, no petting, no spitting etc. 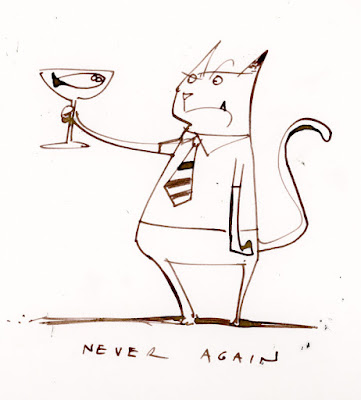 When cocktails talk back 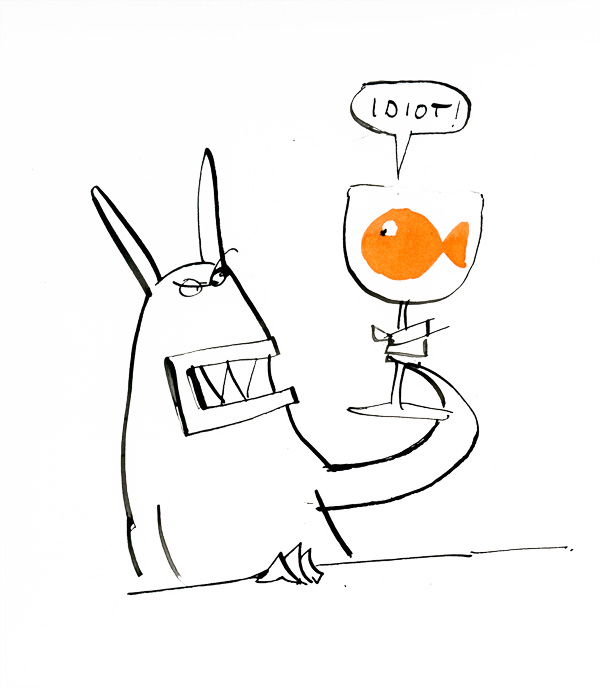 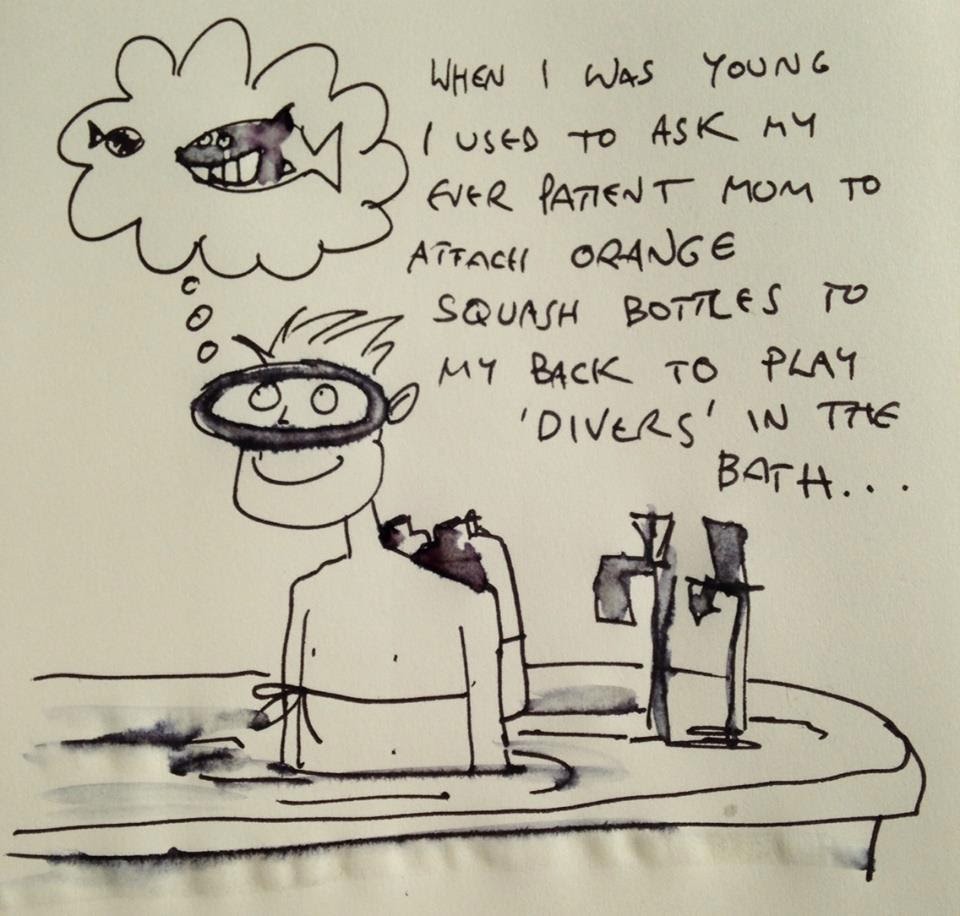 ...& now I'm off to learn to scuba dive for real finally so no more post for a couple of weeks
Posted by Steve May at 16:37 0 comments 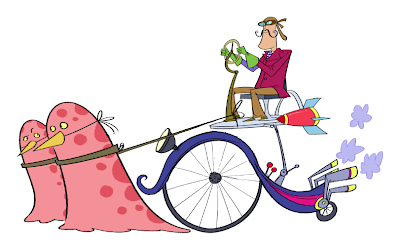 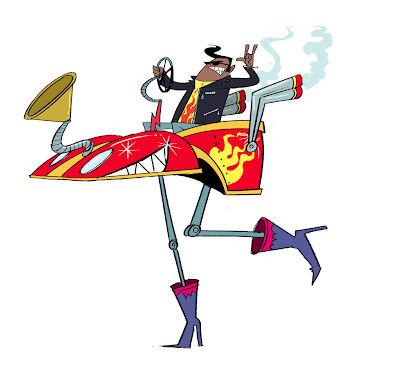 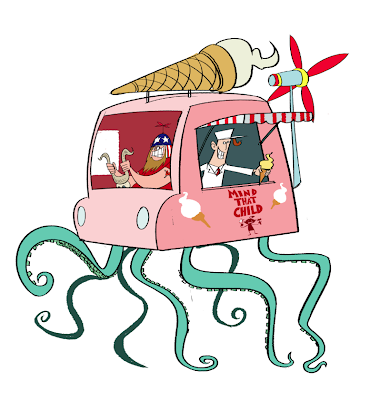 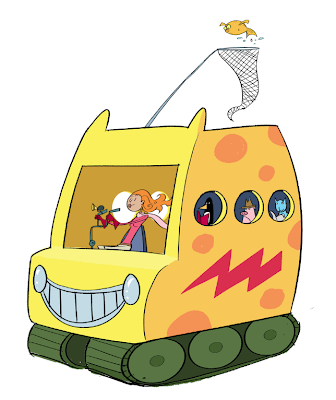 I've had some stupid fun creating these hybrid modular vehicle prototypes for a game project with the lovely people at Mudlark enabling you to mix & match components / drivers etc.  & design your vehicle of choice.
Posted by Steve May at 12:05 0 comments 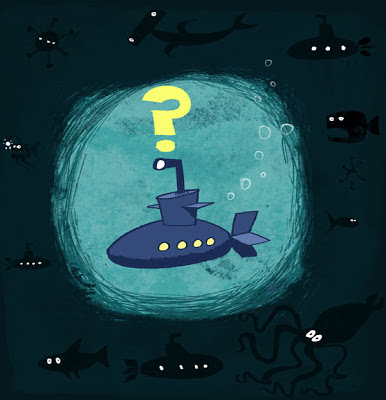 Recent illustration  for The Economist Technology Quarterly about the technical challenges of effective communications under the sea.
i.e. it's difficult to update your Facebook status if you don't want the enemy finding out about your sandwich of choice etc.
Posted by Steve May at 12:38 0 comments

Old men arguing about the size of fish 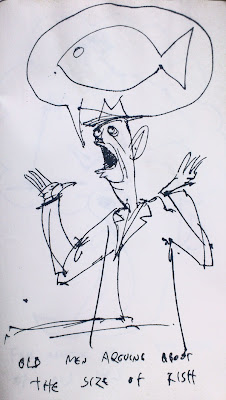 When I was in New York I drew some old men arguing about...oh you know the rest!
Posted by Steve May at 14:50 0 comments 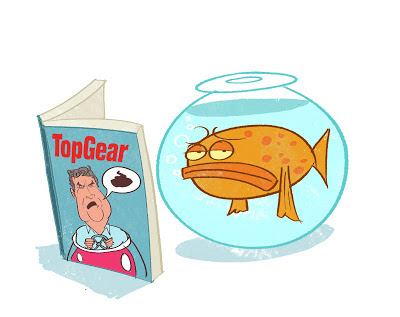 *Recipe - quickly re-hash old TV scripts together add a few photos then season with a healthy dollop of contempt for the buying public.
Posted by Steve May at 09:10 0 comments 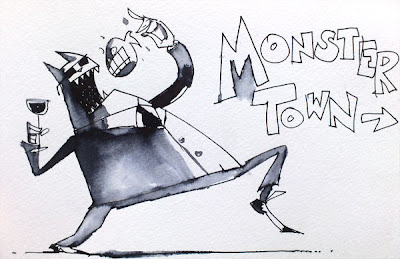 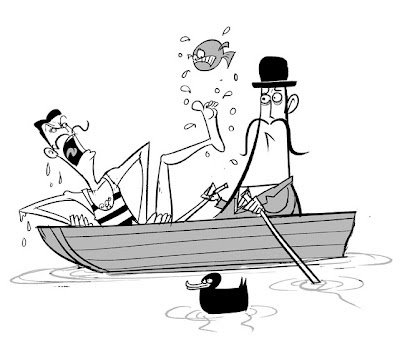 Seeing as we just got our first gold in rowing I thought it'd be pertinent to mention how swimming & rowing were intertwined in the 1900 Paris Olympics where the swimming events took place in the river Seine including an obstacle race which swimmers had to clamber over & under rowing boats(!) 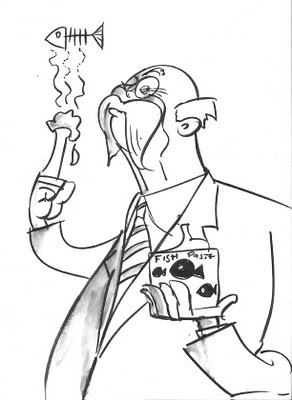 Drawn in response to a 9 year old's poem about a Colonel that smells of fish paste(!)
Posted by Steve May at 11:45 1 comments 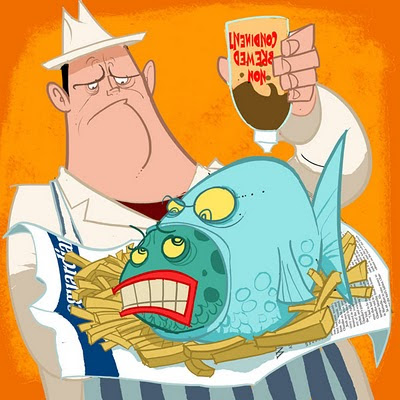 Having been brought up at the seaside I know everything about fish & chips - FACT!
Read the article here
http://www.guardian.co.uk/culture/2010/oct/16/michael-holden-all-ears
(article by Michael Holden)
The good fish and chip shop near me is and always has been run by a couple of contrasting dispositions, which, as they get older, seem ever more pronounced. She grows more talkative, while he becomes more contemplative, staring hard into the fryer, eyes on some unknown horizon. A look I call "thousand cod stare". He was doing this again the last time I went in, and then eventually he spoke.

Him "I wish I was somewhere hot."

Me (facetious, going for the cheap joke) "It's hot in here!"

Him (getting into his stride, making his own joke) "I got something mapped out. Can't take the wife, though. What about you?"

Me "I was in Egypt in February."

Her (like I deserved to go away more often) "That was a long time ago."

Her (having none of it) "But you come back and it's cold."

Me "It was cold before I went."

Me (wanting to sound clever) "I like all that part of the world, you can see why they're always fighting over it."

He gazed into the boiling fat and then scooped out my dinner.

Him (with resignation, as though explaining great truths to an imbecile) "But the problem is: the big fish eats the little fish."

Me (words leaving mouth of their own accord) "Mostly, yeah. I suppose. I dunno."

His wife handed me my fish and he looked at me as if to say, "You just don't get it, do you?" And I'm still not altogether sure that I do. 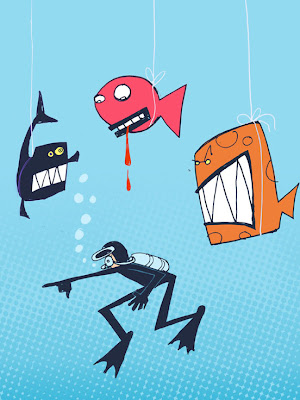 more fishy sketchbook nonsense
Posted by Steve May at 13:33 0 comments 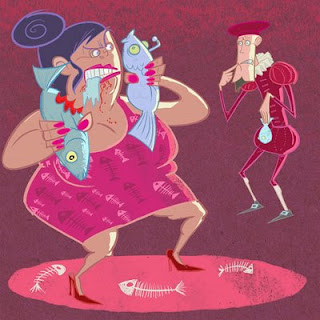