Just another Saturday night...
Posted by Steve May at 13:15 0 comments 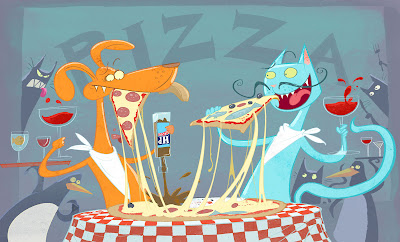 NB This is an humorous picture for the purpose of amusement. Please refrain from feeding pizza to your pets.
Posted by Steve May at 11:41 0 comments 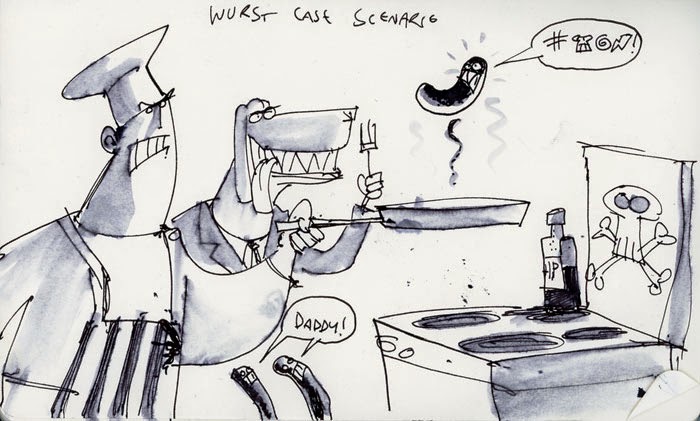 Drawn waiting for an Apple 'Genius' to look at my IPhone this morning whilst pining for breakfast
Posted by Steve May at 13:40 0 comments 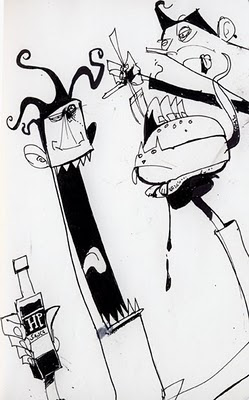 ...wondering if HP might grant me a free supply?
Posted by Steve May at 18:20 0 comments 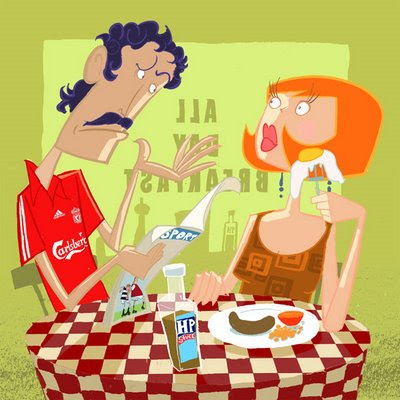 Apologies for rather crass scouse stereotype this week - sometimes one is persuaded into slipping into visual cliché (no apologies for HP sauce though - it RULES!)

(article by Michael Holden)
I was having a cup of tea in a café at the end of the football season. Apart from a young couple talking at the table behind me, no one else was there. The young man seemed a bit agitated, the Woman was trying to keep things bright and cheerful, which only seemed to annoy him more.
Man : (reading from the sports section of the Daily Mirror) Here y'are, look at this - Liverpool only lost two games throughout the season and they STILL didn't win the title. That's how tight it is now.

Woman : (sounding like she meant it) Only lost twice? Wow!

Man : (complacent) stats dont lie. Look at this - Gareth Bale, made 23 starts for Spurs - lost everyone of them. Never been on the winning side.

Woman : Why doesn't he join another team?

Woman : Is he rubbish?

Man : Well, what do you think?

He waited, as though to allow her time to absorb the full magnitude of what he thought he was saying.

Man : It's not as simple as that, anyway.

Woman : Is football finished now then?

Woman : And then it all starts again?

Man (annoyed that things were not as esoteric as he might have liked) : It's a simple thing made complicated.

I sneaked a glance as I left - he'd flung the paper onto the table and she'd picked it up. He was staring out of the window, She was looking at the TV pages.