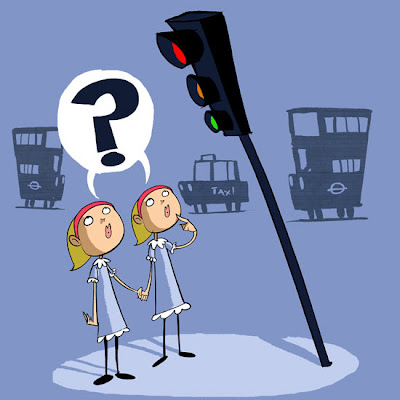 Creepy Shining twins survey the traffic flora & fauna...
http://www.guardian.co.uk/culture/2010/feb/27/michael-holdens-all-ears
(Article by Michael Holden)
Three kids-two girls of around five and boy who might have been seven-were sat on the front upstairs seats of a bus. The girls were sitting together and the boy was next to a man with headphones on, who looked too young and disinterested to be their father, and he wasn’t. When their dad did finally tell them to be quiet he did so from the comparative sonic safety of a seat several rows behind them. Those of us sat in between though were subject to full force of his children’s shrill enquiries.
Girl 1 (loudly) “How does hair grow?”
Boy (with complete confidence)“Hair is like magic.”
Girl 1 “How do people grow?”
Boy “People grow at night. If you go to bed early you will grow tall.”
Girl 2 “How do buses grow?”
Boy “Buses are just like buses. They don’t’ grow.”
Girls (in unison, having sensed an opportunity) “How do traffic
lights grow?”
Boy (playing into their hands) “Traffic lights don’t grow.”
Girls (gaining momentum now, and growing sinister-like the twins in
The Shining) “How do taxis grow?”
Boy (banging his head on the seat with each syllable, frustrated with the game which he had partly created) “Taxis-don’t-grow!
Girl 1 “How do people die?”
Girl 2 (straight afterwards) “Why do people have red hair?”
Father (as though having his children unlock two of the great mysteries of existence before a captive audience might be more than the universe could bear.) “That’s enough kids. Shut up now.” •