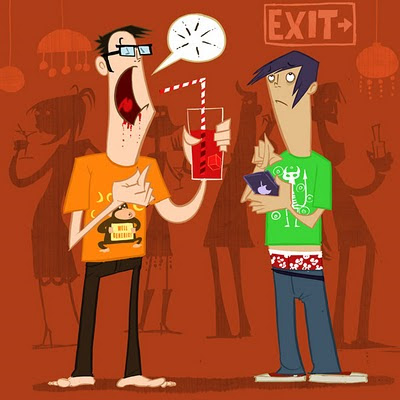 Despite all labelling to the contrary I did draw this ...it's better than 'insert artist name here' which I've been referred to by before...someone shoot the sub editor!
http://www.guardian.co.uk/culture/2010/feb/06/michael-holden-all-ears

Listening to people who seem to have been parachuted into one another's company – yet appear to get along perfectly well – a very modern form of cynicism kicks in, at least for me. Like watching the opening scenes of Big Brother, part of me is always thinking, "This won't last. They will soon hate each other." So it was with two young men sitting at near me in a bar, exchanging stories of themselves for reasons that were never clear.

Man 2 (as though what followed were something to be proud of) "Oh yeah, I watch a lot of stuff on YouTube, keep up with the latest viral ads. Sometimes I help out with a pitch. You're based in the Far East?"

Man 1 "Bit of everything. I'm part-training, part-headhunting with a bit of systems shit thrown in. My boss is opening a restaurant; I said I'll have some of that. So I'm a partner there too."

Man 1 "Oh yeah. I rip through the local legal shit, I make things happen. On a project-by-project basis. You need something done, we can take it all the way."

Man 2 "You speak the language?"

Man 1 (rubbing his fingertips together to illustrate his point) "Money talks. But that's not to say you don't have to get your hands dirty, get hands-on. You get off the path and it gets tribal. I've been to weddings barefoot. Drunk blood. Whatever it takes."

Labels: All Ears, steve may, the Guardian