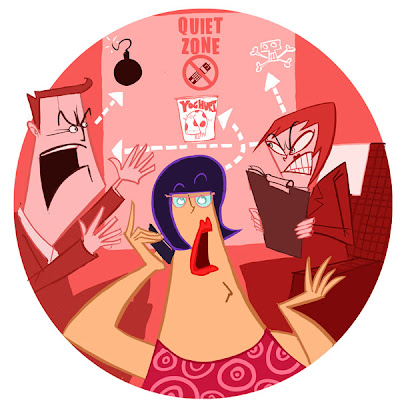 
(Article by Michael Holden)
On busy trains conversations rise like dissonant music from all
angles, leaving you to bear befuddled and silent witness to the
results. Departing Manchester recently I was regaled by the almost
hieroglyphic exclamations of a Welsh woman in the seat behind me,
themselves punctuated by outbursts from a businessman and his clearly
long-suffering PA to my left-referred to here for reasons of clarity
as Alan and Lynne.

Woman (on the phone) “Did he tick all the boxes?”

Woman “You’re kidding?”
Alan: “He needs to get focused again”

Woman: “I got rid of all my yoghurts”

Woman “Remember he’s on holidays…the slim guy with the glasses and the
army jacket and the long hair…well he told me he was on holiday…you
said it was super. You couldn’t see? Well that’s gutting that
is…that’ll be your last scan now, unless you pay for another…they’re
coming down are they?”

Lynne (nervously watching Alan read something) “It all adds up.”

Woman: “You’re breaking up. I’m going to a meeting but I feel so
un-meetinglike.”
Alan: (waving the paper angrily) “I can’t read this, cut to the chase!
Where are the bombs in this agenda, where are the bombs, the IEDs?”

Lynne (stifling a scream but still loudly, while snatching back the
documents) “IT’S JUST A LIST OF IDEAS.”

That shut him up, for a while.