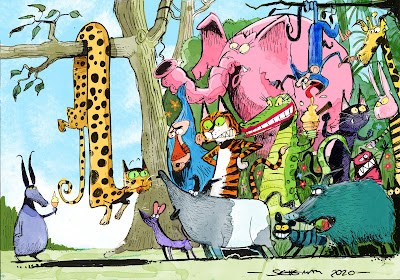 I drew another version - remember, say NO to jungle-bullying!
Posted by Steve May at 16:45 0 comments 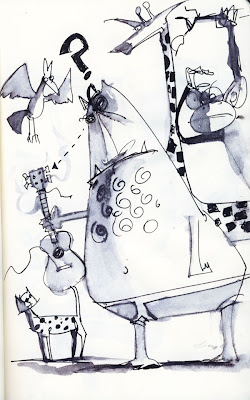 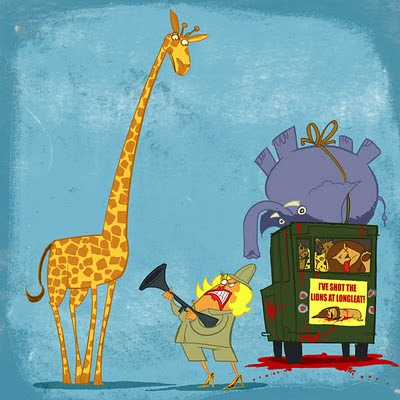 I'd just like to point out that I'm extremely fond of giraffes & other aminals & I do not condone the shooting of them - this is only a picture IT'S NOT REAL!*
(*subtitled for the hard of thinking)
http://www.guardian.co.uk/culture/2010/aug/21/michael-holden-all-ears
(Article by Michael Holden)
As is often acknowledged in this column, cab drivers are the commandos of casual conversation; the rest of us are just parachuting in when the groundwork's been done. I had the good fortune last week to be sat near one in a cafe as he shared stories of his fares' safari antics with his friends.

Man 1 "I been busy bringing the Americans in and out, been a few years now. I know some of them quite well."

Man 1 "All right, well there's one I thought was all right. He was telling me how he likes to shoot things … animals. He goes over to Africa and has a go at anything that moves."

Man 1 "Very much so. I'm not one to judge, but then he says he's getting hammered for freight costs, cos he flies all these things back over there and has 'em stuffed!"

Man 1 "Oh yeah. I said, 'How does your wife feel about that?' And this is what really got to me, he says: 'She loves it. Her life's ambition is to shoot a giraffe.'"

Man 2 "I don't get it. At what point in someone's life would they wake up in the morning and say, 'I know what I need to do before I die. I know what's been missing. I got to shoot me a giraffe!'"

Man 3 "What's the psychology behind that? Is she really small?"

Man 3 "Or is it that their heads are small, and a long way away?"

Man 1 "A fucking giraffe, though?"