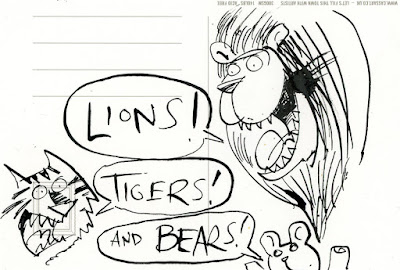 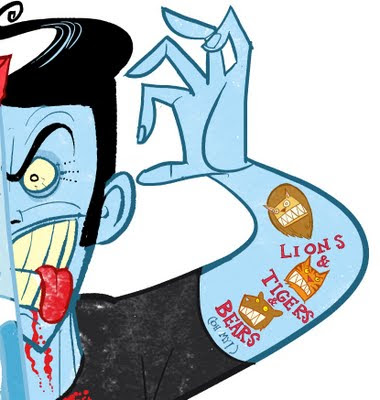 Detail from previous post - am most perplexed why more people don't want Wizard of Oz tattoos theses days
Posted by Steve May at 10:23 1 comments 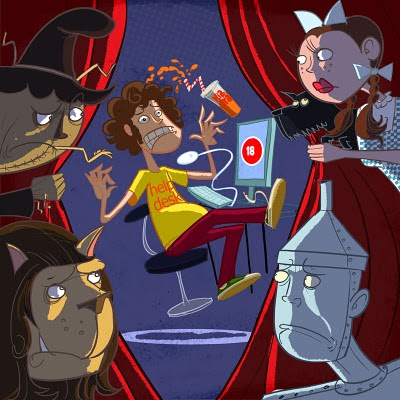 (Article by Michael Holden)
Two men in a pub – reassured no doubt by the physical nature of their conversation – were speaking loudly about the benefits of doing things in the real, as opposed to the digital, world.

Man 2 (wearily) "I asked the venue. They have a site and I sent an email saying, 'When are they on?' The woman emailed me back and said, 'Why are you asking – are you in the band?'"

Man 1 "This is the problem with the internet: everybody's got a fucking site – but who are the idiots behind them? I mean, if you were running a real business and you heard someone not answering the phone – or delivering basic information – you could step in."

Man 2 "You do wonder how much of this is driving the recession – digital idiocy, dressed up as work."

Man 1 "True. It's incompetence veiled behind a virtual curtain."

Man 2 "You pull back the curtain – and there's nothing there. No one."

Man 1 "Not even the Wizard of Oz. Not even an old man who might apologise and give you something useful."

Man 2 "Not even. Pull back the curtain and there's just someone there wanking off – going, 'Why? Are you in the band?'"

Man 2 (happy to have worked out a phrase that those around him would be hearing a lot more of) "Exactly."