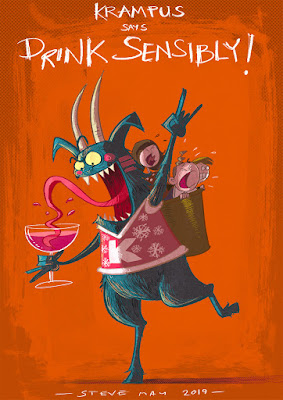 Krampus is a mythological creature or demon, particular to parts of eastern and northern Europe, especially Austria and Hungary. It is believed that Krampus accompanies Saint Nicholas during the Christmas season, warning and punishing bad children (in contrast to St. Nick, who gives gifts to good children). Due to German and Austrian influence, the myth of Krampus is also prevalent in Croatia, (Czecho)Slovakia, Slovenia and northern Italy.


The word Krampus originates from the Old High German word for claw (Krampen). Traditionally, young men dress up as the Krampus in the first two weeks of December, particularly on the evening of 5 December (St Nicholas' Eve, known in German as 'Krampusnacht'), and roam the streets frightening children and women with rusty chains and bells. In some rural areas the tradition also includes birching - corporal punishment with a birch rod – by Krampus, especially of young girls.
Images of Krampus usually show him with a basket on his back used to carry away bad children and dump them into the pits of Hell.
Posted by Steve May at 17:09