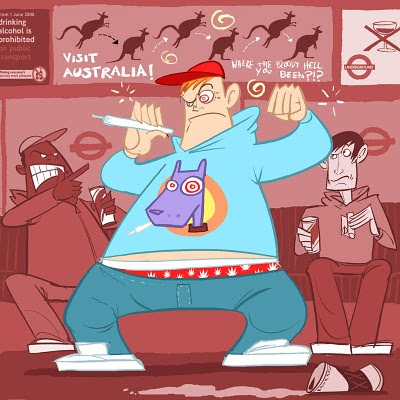 After playing with several Gypsy/carpark/well-known-cartoon-character-with-explicit drug-reference combinations I figured this illustratory* route would leave me less on the road to future legal action.
On the other hand the consumption of the kind of beer you only get in gold & black cans on public transport slightly appeals to me but purely for the fact of pissing Boris Johnson off. Me? Childish? You bet!
(I'll shut up, you can read the article here)

(Article by Michael Holden)
Having failed to visibly outrage anyone by drinking lager on the tube, the four young men sat opposite me seemed anxious to raise the stakes by talking openly about cannabis. First, though, they had a more immediate problem – one born of their initial transgression.

Man 3 (looking at his can of lager) "I swam through my brother's sick on holiday. I thought it was coral at first – it was all in my goggles and shit. This was on the Great Barrier Reef. It's a sick country, Australia."

Man 2 (holding a bit of paper) "Make the roach nice, that was one of the first things I learned about smoking."

Man 2 (rolling it up) "It's my bus ticket, keep the white bit on the outside, you have to twist it. That way you get feedback."

Man 3 "Back in the day I used to think I was the don. I used to get bare stoned and just watch The Simpsons. Nobody knew. I was 13."

There was no reaction to this, so he upped the ante.

Man 3 "That was before I got expelled."

Man 3 "I fight Gypsies in car parks – like on that show."

With that they were off, checking as they went to see if anyone had noticed them.