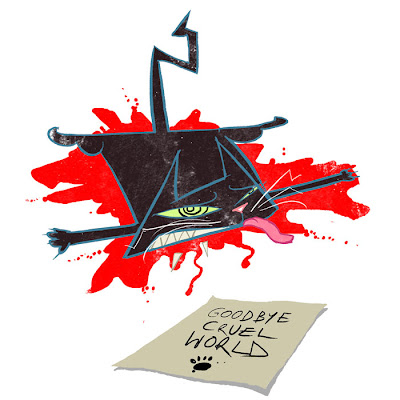 One for all you animal lovers this week...

(Article by Michael Holden)
A woman who works in a pub near me is sometimes visited by a man with whom she has had, or is having, some sort of relationship. The pattern is the same: she gives him a drink, he asks for another, she refuses, they argue and she gives in or he leaves – usually the latter. Towards the end of the first drink, a conversation sometimes breaks out, of which what follows is a fairly typical example.

Woman "She was looking after her cat, and it killed itself."

Woman "It done itself in."

Woman "This one did."

Woman "Threw itself off the balcony."

Man (laughing) "That's the one thing they're good at, innit? Surviving a fall? Nine lives and all that. If you were gonna top yourself, you'd do something different. Swim out to sea or something."

Man "Bollocks. She's made that up."

Woman "It ain't. There was another cat round the corner. Same thing."

Man (giggling) "Well, what's their angle, you think? Depressed, or just like a cry for help?"

Woman (walking away) "I don't wanna talk to you about it."

Man "Well you should talk about it. I mean, if it's happening, you should call someone. There might be some money in it. You'd have Sky News in here. I think you owe it to the cats, to get to the bottom of it, so to speak."

Woman (entering the cellar) "Fuck off."

Man (calling after her) "Can I have another drink?"

But there was no answer. Perhaps she too could take no more.
Posted by Steve May at 10:42