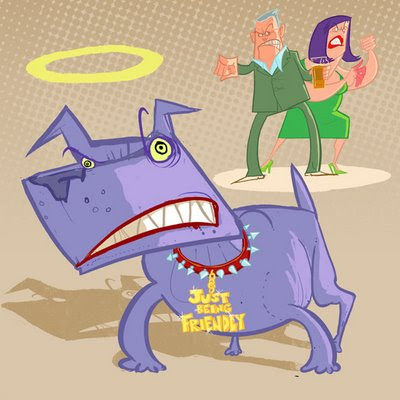 Re. tiny dog phenomenon...they seem to have a bit of a thing for tiny dogs in New York but they usually seem to be owned by muscley gay gym bunnies (on Canal Street at least!)

(article by Michael Rosen)
I feel the tiny dog phenomenon to be a puzzling business, but when one of these benighted freaks starts attacking things several times its size I find their mad tenacity a joy to behold. It was precisely such a display of dwarf-dog fury that led to the following exchange between a pair of staggering drunks who had made the mistake of trying to caress one of these hand-held heartbeats and come of second best.

Woman: (getting as angry as you can without spilling your drink) “The fucker bit me!”

Man: (foolishly opting for admonishment over sympathy) “You should never have touched it. They’re not right”

Woman: (detonating) “He said it were alright!”

Woman: “It started off licking me hand. Then it went for me. You heard it.”

Man: “Ask someone what their dog’s like and they’ll tell you it’s great, even while it’s got its jaws on you, they’ll be telling you it’s trying to make friends.”

Woman: (looking for signs of injury to her hand and finding nothing that might merit litigation) “Little bastard.”

Man: (making a huge but somehow valid leap of comparative reason) “It’s like the Krays. Their mum always said they was alright. Different story when they’re breaking your fuckin’ legs with a hammer.”

Woman: “What you on about, hammers?”

Labels: All Ears, dogs, just being friendly, the Guardian, www.stevemay.biz