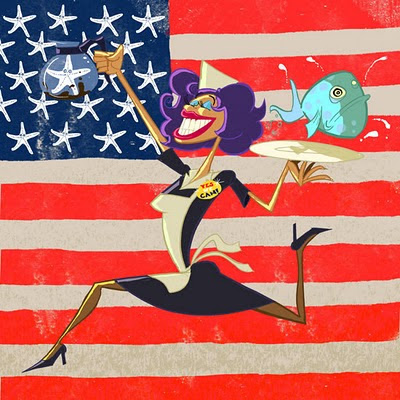 http://www.guardian.co.uk/culture/2010/apr/17/michael-holden-all-ears#
(Article by Michael Holden)
In an American airport bar, I didn't notice what the woman sitting next to me had ordered, but I started to pay attention when she tried to negotiate over how long it should be cooked for.

Woman "Could I get that rare?"

Waitress "How do you mean?"

Waitress "I don't think we're allowed to do that. I think they all have to come the same way. It's good, though."

Woman (unmoved) "I don't want it medium rare or anything."

Waitress "I think it just comes how it comes. I never heard anyone complain about it. I'll check. Shall I check?"

She left and came back triumphant, full of possibilities, channelling the remnants of the Obama vibe.

Less than three minutes later the waitress brought the woman a plate of fish that looked anaemic. You could tell by sight that it would be a mistake to eat it.

Woman (pushing it away) "Can you cook this more?"

She was gone for another few minutes and when she came back the fish looked edible. The woman, though, just looked at it sideways and prodded her Blackberry. Evidently she wasn't big on second chances.

Waitress (checking back, but happy to ignore the evidence on the plate) "How is everything?"

Woman (just as willing to maintain the delusion) "Everything's great."

Waitress (reaching for the untouched plate) "Are we done here?"

Woman (more right than she knew) "Yes we are". 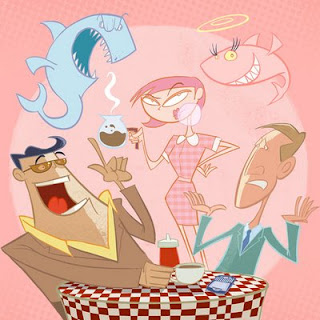