Guardian All Ears 15th May 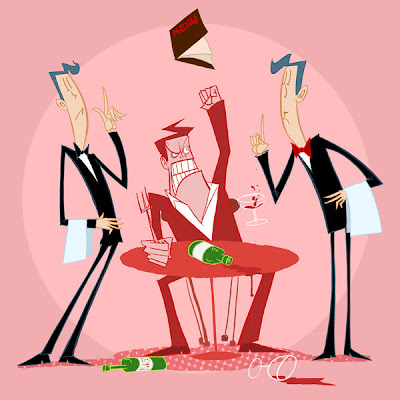 To my knowledge I have never encountered a chocolatier - maybe this is what's missing in my life? (see article)
http://www.guardian.co.uk/culture/2010/may/15/michael-holden-all-ears
(Article by Michael Holden)
It struck me the other day that, without drinking, this column
couldn’t exist. Consider the man I saw shouting at an upmarket
confectioners - he had a valid point I felt - but not one that he
would have expressed via public yelling if the shop in question hadn’t
been opposite the pub where he was drinking.
Man 1 (furious, pointing at the shop window) “What the fuck is a ‘Choclatier’?”
Man 2 (less drunk) “They make chocolate.”
Man 1 “Yeah yeah, but when did they did they hit the high street?
Since when did we decide we needed one?”
Man 2 “It’s like anything …”
Man 1 (having none of it) “It’s not like anything! It’s what it is.
Modern shit! You don’t need it, you didn’t ask for it but there it is,
being sold to you, and here we are, fucking buying it!”
Man 2 (growing smug) “You can’t make a political point about chocolate.”
Man 1 (his conviction rising above his inebriation)“If you can’t see
the politics in this-then you’re in a lot of trouble. Politics now is
like a fucking restaurant, a roadside restaurant! Owned, run and
staffed by wankers, who take great fucking pleasure in telling you
that everything on the menu that you might have wanted is off.”
Man 2 (choosing to ignore the bigger issue but tempted by the analogy)
“I am actually quite hungry. Shall we get something to eat?”
Man 1 (losing steam) “Ok.”
Man 2 “What do you fancy.”
Man 1 (made infantile through despondency, capable of tears)
“Don’t care.”
And, with that, he was led away
Posted by Steve May at 12:40 1 comments