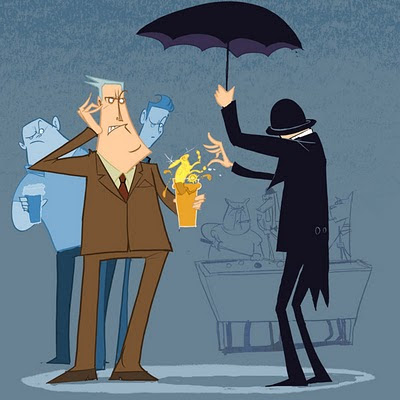 Spot the references...I couldn't resist the pool playing dogs (which don't show up at all in my copy of the paper - ho hum)
http://www.guardian.co.uk/culture/2010/feb/13/all-ears-the-guide


(Article by Michael Holden)
The world is full of strange cycles. Go into a pub to use the toilet,
buy a pint for the sake of protocol and pretty soon you’re back in the
toilet again. I was in one of these loops when I saw that the pub
itself was fixed in a weird judgemental cycle of its own. Two people
were looking at a laptop and pointing out things they didn’t approve
of on the Internet, themselves watched by two workmen who clearly had
no time for them, while next to me two more men talked disapprovingly
about popular art as I listened disapprovingly to them.

Man 1: “Did you see that documentary on the BBC the other night? It
was about that guy, Kit Williams, he did like photo-realism, it was
very popular in the 80’s –horrible pictures-he made a gold rabbit?”

Man 1 (pleading) “You must remember the rabbit? Everyone was looking for it.”
Man 2 “I don’t recall. There was another thing though, something to do
with following letters of the alphabet. If you figured out the
sequence you got twenty grand or something. It wasn’t long ago.”

Man 2 “I don’t know him.”
Man 1 “It was a good documentary. But the thing with that stuff is
it’s all about the craft, ‘oh, it really looks like him.’ As if that’s
the most important thing!”
Man 2 “Like that Jack Vettriano. He knows what people who don’t like
art like. They like story.”
Man 1 (looking blankly afraid, as though suddenly alert to all his own
frustrations) “He makes millions.”
Man 2 (looking the same) “Yeah.”