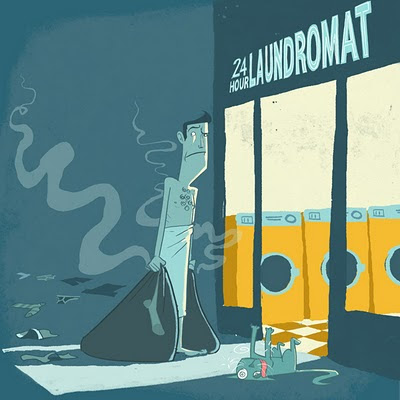 Quite fond of this one despite virtually having to draw it twice due to a subtle mix of computer balls-up & a little touch of vintage f***wit-ery from yours truly...oops!
http://www.guardian.co.uk/culture/2010/oct/09/michael-holden-all-ears
(Article by Michael Holden)
The idea that once you have paid for something you are entitled to complain about it is much in evidence at the gym, where whining about the facilities has become wildly popular of late. The nerve centre of this discontent is the steam room, itself a source of perennial complaints.

Man 1 (always complaining) "They blame it on the pipes. You never know, though. I think it's the door. You'd think people would have the common decency to shut the door!"

Man 2 (recently roped in) "Well they could put a spring on it."

Man 1 "It's a waste of resources, really. Take all the water in the pool. I mean, once it's full it's OK, you just recycle it, but filling it up …"

Man 2 " I Probably wouldn't use that much water in a year."

Man 1 "I've got two sinks but I've narrowed it down so I only use one of them. My washing machine broke, and I didn't replace it. I figured out I could pay £400 and have a new washing machine or I could start going to the launderette. There's one 30 seconds' walk from me."

Man 1 "I go every two or three weeks. It works out around a fiver. So at that rate I'm ahead for about four or five years I reckon. And that's before you factor in the cost of the electricity. So I've lost the machine and I've got a load more storage space now."

Man 1 (attentive to the bigger picture) "Yeah, but, I also stink."