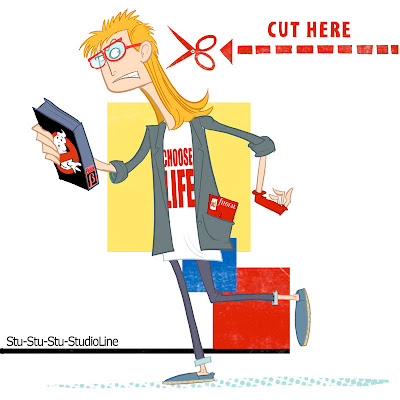 I've still got the scars from my '80s teenage years (but have burned most of the photos!)

- wish I'd left the 'studioline' text off the illustration but I like to present it as printed - one of those cases of 'funny-at-the-time' (like mullets? Conceptual hey?)
Original article here
(Article by Michael Holden)
Walking down a side street I was suddenly overtaken by two young men making quickly toward the main road and kicking around a conversation of sufficient merit and volume that I found myself having to speed up in order to keep abreast of it.

Man 1 (pressing for an answer) "What do you call him, the guy with all the hair down the back?"

Man 2 (making snipping motions) "I go up behind him and do the scissors thing – everyone laughs."

Man 1 "We said to him, 'What happened? Did your mum freeze you in the 80s?' Everyone laughs at him! Even the general manager's on to him about it, saying, 'I think it might be better if you didn't have that hair.' But he's all, 'No no no – it's my thing.'"

Man 2 (shaking his head in recognition of a lost cause) "And he's proper slim, innit?"

Man 1 (sad and angry – as though he had great plans for the man's hair that might never see the light of day) "It just doesn't suit – doesn't suit him!"

They laughed loudly though, as they reached the high street and jogged away into the crowd, who all looked much the same as them.