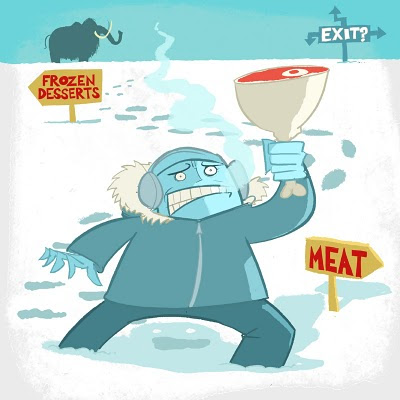 On reflection would have liked to have added a penguin into the mix,
I like penguins. End of.
http://www.guardian.co.uk/culture/2010/oct/30/michael-holden-all-ears
(article by Michael Holden)
By giving us what we thought we wanted whenever we wanted it, supermarkets have bred a reciprocal brand of super anxiety. Listen closely, and the aisles hum with a discontent peculiar to the resentment of dreams fulfilled. Down by the fresh meat fridges, I found two men bemoaning the very air that they breathed.

Man 1 (sifting through the giblets) "It's cold in here."

Man 1 "For sure. You come in here in summer with a T-shirt on and you have to run round, get out before your core temperature plummets down."

Man 2 (pulling at his ears) "I can feel it in my ears. My ears are cold. That never used to happen."

Man 1 "It's just daft. Think about the energy."

Man 2 "It's unpleasant, is what it is. Maybe it's to keep you moving. Get you in and get you out. Like the fucking Crystal Maze.

Man 1 "It's gotta be a preservation thing. They fly this stuff in from wherever the fuck – Argentina – everybody hates that. So they have to keep it as long as possible, drop the temperature of the whole store."

Man 2 (grabbing a lump of meat and reckoning its heft as though he might use it as a weapon) "It all comes down to energy."

Man 1 "We should go somewhere else."

Man 2 (holding the joint at eye level and staring directly at it, Hamlet-style) "There isn't anywhere else though, is there?" 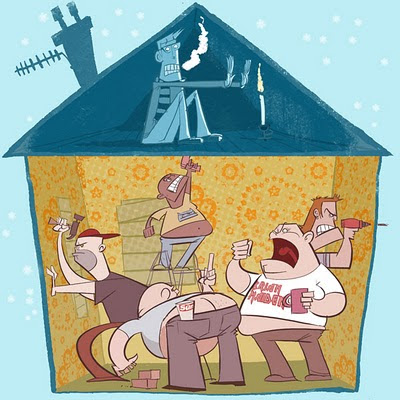