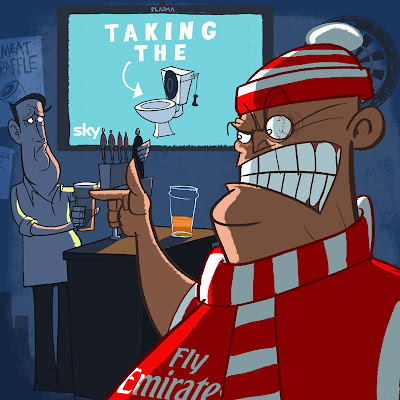 Meh! Crappy illustration - what can I say - definitely an off day...

(article by Michael Holden)
Late one Saturday afternoon in a pub deserted save for myself, two pool players and the bar staff, who were watching Catchphrase on the TV, a man walked in looking anxious.

Man "I don't want to put you out, but can you stick the football on?"

The staff simultaneously turned forlorn, as though this would constitute a disaster.

Man (not quite believing what was happening) "What, you're actually watching this?"

Barman (sadly) "What match was it you wanted?"

Barman (holding out his iPhone) "What score did you want? I can get it on my phone."

Man "It's the FA Cup, I want to watch the scores come in, for all the games."

Man (rightly miffed) "I'd like to sit down and pay you the best part of four quid for a pint, while you – who are paid to be here – turn over the television which you, or whoever runs this pub, pays thousands of pounds a year to show live football on. It doesn't seem to me to be a lot to ask."

Barman (sort of standing up) "Well …"

Man (snapping) "Fucking Catchphrase … it hasn't been on for 10 years. Or is this a classic episode? One of the greats. 'Say what you see.' I'll say what I see: you lot in here, taking the piss."

Barman (relenting) "I'll turn it over."

Man (not having it and walking away) "No, you stay where you are. I'll go somewhere where it's not a problem. It's places like this that give drinking a bad name."

I looked around me, and he was right.