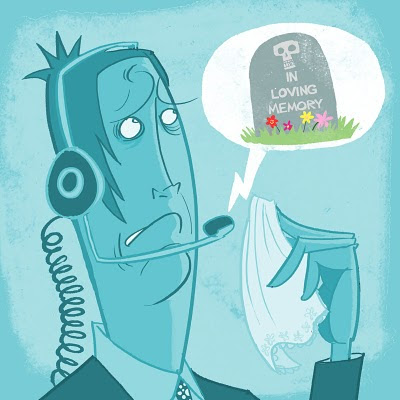 I've never used the 'recent bereavement' method for dealing with cold callers but I did once conjure up a story about a colony of light sensitive 'mole people' whilst persuading a replacement window salesperson that their product was insufficiently opaque for my needs...

(Article by Michael Holden)
Amid the debate around minimum pricing for alcohol, I should point out that, in six years of writing this column, it's been my experience that people who have paid more to get drunk say duller things while they're getting there. The cut-price drinker might reach oblivion faster and generally live a shorter life but, on balance, they get the better lines. This discourse from my local bargain hostelry being a case in point.

Man 1 "I told a feller on the phone my wife was dead."

Man 1 "Nah, but it was the call centre. Three days in a row they'd asked for her, so I told them she was dead – and you could see it took the wind out their sails."

Man 1 "I really turned it on, sobbing and that. Got quite into it. I could hear the feller was upset too. He said they'd delete the number – never call back."

Man 1 "Not really. Once I heard how moved he was I started to feel bad. I'm not cut out for the lying, you know."

Man 1 "If I were, life would have been easier. Instead, I felt like one of those murderers who does a press conference for the person they've killed, asking for help and that."

Man 1 "Maybe. Either way, I was glad when she walked through the door."

Man 1 "Yeah, which would have been typical of her."