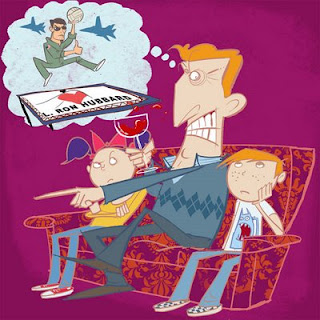 I too have never seen Top Gun but I ain't getting too angsty about it...

I was in a decent restaurant waiting for someone to arrive and when the waiter handed me a menu I hid my face inside it as though this might make my listening less conspicuous to the men on the next table.

Man1 “I never saw it when it was out, it was sort of everything I hated at the time. Anyway the kids were watching it the other night so I thought might as well see what all the fuss was about.”

Man 1 “Well it’s balls, isn’t it? I have to try and keep quiet when the kids are watching a movie I hate, not that they care what I think particularly, but you can get wound up when they’re enjoying something that you think is awful.”

Man1 “Well I could cope with all the flying around…”

Man 1 “Yeah, I could live with the fact they were flying upside down at Mach whatever taking Polaroid photos, and I could cope with the fact that he’s having an affair with Kelly Mcgillis who’s supposed to be an authority figure, I mean it’s all ridiculous, but then Tom Cruise is playing volleyball, he keeps leaping up and slamming the ball down, and he’s a midget, isn’t he? That wound me up, I had to say something.”

Man 1 “I said to the kids I said either he’s on a trampoline or that’s not a real Volleyball net. They didn’t even react but, you know, I’m right.”

Man 1 (having exploredl the possibilities and formed a conclusion) “No, because it’s bullshit!”