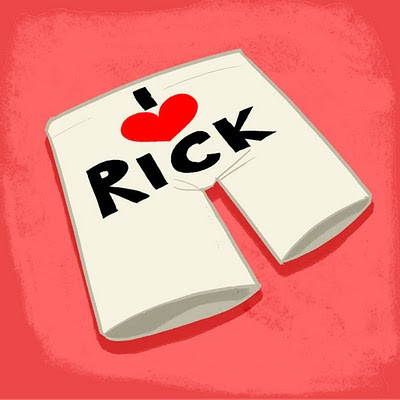 I was thinking of drawing a complex baroque portrait of Brian Ferry in a bath chair but then thought 'f*** it, I'll draw some pants instead'!
http://www.guardian.co.uk/culture/2010/jul/31/michael-holden-all-ears
(Article by Michael Holden)
Buying some drinks to take outside, I noticed that the pub had filled with men who were exceptionally big. Not in the gym-fit sense, but in the genetically vast sense, and all wearing sensible shoes. So who were they? Cops? Rugby players? Some unholy hybrid of both? The only thing I learned for sure was that they knew a bit about Roxy Music.

Man 1 (clearly the leader) "They weren't that good on Jonathan Ross."

Man 2 (whose function seemed to be to orchestrate the collective response to anything said by Man 1) "No, they weren't."

Man 1 "I went to that 80s thing, that festival. He was there, what was he called? Howard Jones! He was all right. Carol Decker, never had much time for her. Kim Wilde …"

Man 1 "Then it's Rick Astley. I tell you what, though, he's got the chat. People loved him. Blokes were throwing their pants on stage!"

Man 1 "I saw Ferry do a solo gig at Wembley 20 years ago. You wanna hear the other stuff, but he's just doing his solo stuff. But they weren't all that on Jonathan Ross."

Man 1 "Tell you what, I tried to get tickets for Manilow, for the wife and mother-in-law. 249 quid!"