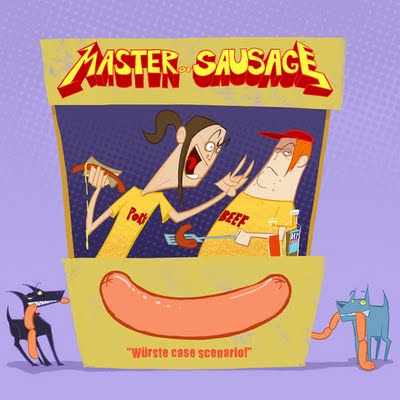 This week's pic involves Metallica allusions & one of the most terrible puns known to humanity but the temptation was...too strong! Many apologies

(Article by Michael Holden)
It’s all very well, the warm weather, but the same streets which people ordinarily walk down briskly are now thick with folk indulging in the pleasures of the season-and for the second week running in this column-that means food. This time I was after a sausage sandwich but noticed that the woman ahead of me was queuing to the extreme left of the stall. I stood behind her until a man walked up and commented on the odd arrangement.

Man “Is this the queue?”

Woman (tense, defensive) “I’m queuing here, because I don’t want to get smoke IN MY FACE!”

One of the cooks handed her a sandwich and she walked off, face intact. The chefs then started talking amongst themselves about the song that was fading out on the radio.

Cook 1 (Eastern European accent) “What do you make of that. Pretty rocky eh?”

Cook 1 (undeterred) “They make an album with an orchestra.”

Cook 1 “It is fantastic. The album with the orchestra is the same album they make themselves before without orchestra. It is so good, sometimes you cannot tell which album you are listening to.”

Cook 1 (the futility of his enthusiasm beginning to dawn) “You like Metallica?”

Cook 1 “Still, you should listen to the album.”