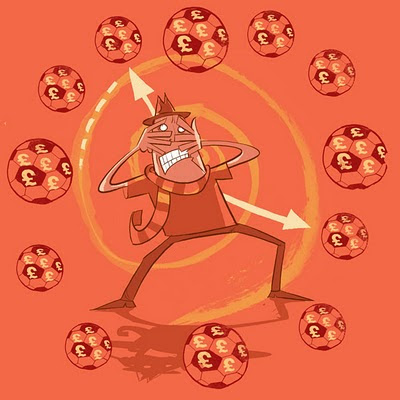 ...due to various 'articles getting lost' & bank holiday shenanigans this was drawn in record time...anyone got Norris McWhirter's* number?
(*this reference severely dates me - Wikipedia him if you must)

(Article by Michael Holden)
At a football match the team I follow scored a fourth goal and I
noticed the young man to my left seemed unusually affected by this. He
crumpled, as though he had been shot and the two older men with him
pointed at him and began chanting.

Evidently he had made a correct score bet, which would net him £1500
quid if nothing else happened for the next 15 minutes. From the faces
he was pulling you might have thought he was giving birth. And fair
enough, it did add a new excitement to a game that had, in spite of
its score, been a pretty hum drum affair. I looked at the clock and
spoke to him.

Man 2 (Leaning across to me) “He hasn’t paid his rent in two months,
so it’s going on that.”

Man 1 (wriggling about, refusing to look at the game) “I can’t cope,
I’m gonna have a breakdown.”

Man 1 (watching through his fingers as the opposition closed in on
goal) “You bastards, you fuck this up and I will fucking come down
there…”

They scored. I couldn’t look at him, but he made a kind of wild
whimpering sound.

Dude, I think Norris is dead.

You illustrate All Ears?! Cool, I read that every week! Nice work, saw your link on flickr.