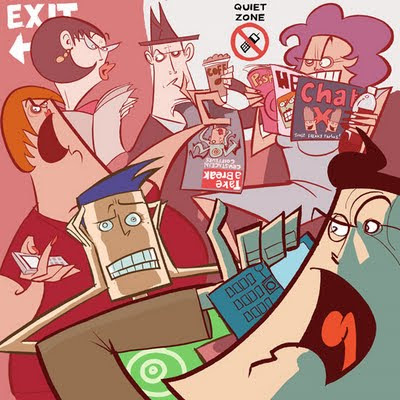 During the drawing of this picture my computer crashed forcing me to have to draw those creepy twins from the X Factor twice - I can categorically state that I have never watched the wretched thing - horrible easy listening mush for all the family - but you can't escape seeing them everywhere - rant! rant! rant!

(Article by Michael Holden)
Years of satanic number crunching at my local train company appear to have finally yielded a system that enables them to deploy the absolute minimum of carriages no matter what time of day it is. So, off-peak travel – once one of the great perks of self employment – is now just a grotesque and scaled-down, Fisher-Price rush hour. The torment of others, which might ordinarily have been confined to an avoidable area, now closes in from every side.

Woman 1 (to my right, "waking up" having feigned sleep to stop people trying to sit next to her) "Give us that mag."

Woman 2 (opposite her, defending her own space with a bottle of partially drunk cola and a crescent of low-rent magazines, one of which she passed over) "That had me laughing out loud."

Woman 3 (directly opposite-reading from a paper to a husband who made faces but never replied) "That zero-carbon housing development is going ahead."

Woman 2 "Did I tell you what happened at work? I only had the key for the top lock, and I asked her for the key to the bottom lock and she give me a load of grief."

Woman 1 (ignoring her, staring at her mobile) "I can't do that predictive text."

I put on some music before any of these crucial issues were resolved.