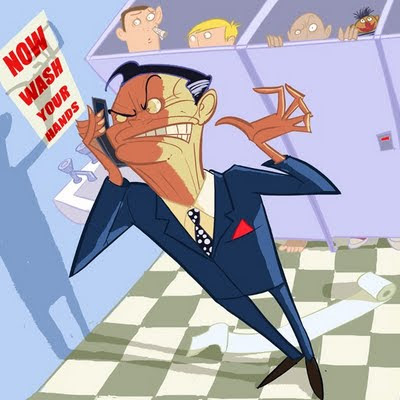 More scary madmen, some drug paraphernalia & a guest muppet! - am realising I may have to ration 'mobile phone action' in these pictures in future as it's cropping up very regularly although it means I'll probably be able to draw one in my sleep now - (a very useful talent you haters!) : )

(article by Michael Holden)
I was about to exit a cubicle in the toilets of a large public building when I heard a man come into the bathroom and start speaking into his mobile. He must have thought he was alone since what had started as a whisper soon rose to yell that bounced of the tiling as he stammered with long-feremented rage over the issue of a posted letter-while I took detailed and clandestine notes and wondered what he looked like.
Man: (hissing-as though he had been stepped on) “Yessss! I posted them the, ‘welcome to your new home card’... Two hours ago. Yes, yes and that’s the reason you’re phoning is it? To see if I’d done that?”
There was a pasue while he absorbed more of whatever was coming over the phone, until he could take no more.
Man (shouting) “This is part of the reason I’m so irritable! The whole context of why I’m irritable is that I understand that there are lots of things to do...Now one of those things, I agree is sending them a ‘welcome to your new home card’... but there are a lot more things, more important things...
He listened again and paced around the room before responding.
Man “ We should have drawn up a checklist of things that need to be done! That’s why I’m so angry about all this-rubbish -about a card! If there’s one thing I’m aware of... is..is because there’s lot’s of things on the agenda ...”
Man (more placatory) “I understand that you’re not as young as you used to be but there are lots of things to remember.... Right, right...Yes!”
There was a long pause, and then he really went for it.
Man “Well I’m, I’m furious and I’m furious about this because there are lots and lots of other things to think about. It’s high time to sort things out-given the change of circumstances...It should be decluttered, It is important now . I’m moving now. I know there’s an echo! I’m leaving the bathroom!”
And he did.

Labels: All Ears, steve may, the Guardian, toilet