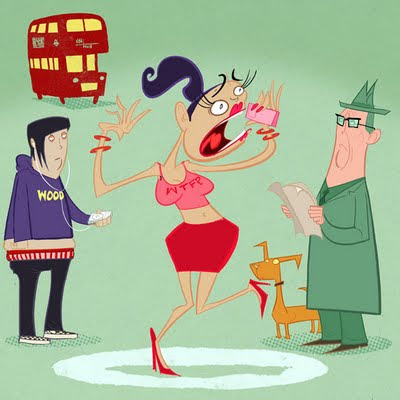 Couldn't resist the 'We Will Rock You' bus because of recently being obliged to walk past the hideous gold Freddy Mercury statue on Tottenham Court road & thinking that I'd rather have my teeth pulled or get gang raped by badgers rather that sit through that dross...*shudder*

(Article by Michael Holden)
Some people become so disposed to talk about themselves that even when they are discussing something else, what they’re really saying is about them. The mobile phone though has elevated self-referential drivel to a higher plane. Nowadays you hear people giving blow by blow commentary on the stupefying minutiae of their existence while-and this is the truly staggering part-someone on the other end of the phone pays attention. I was at a bus stop with a crowd of people the other day when a teenage girl started yelling into her phone while endeavouring to stare down the rest of the queue by sporting a look of complete hostility that suggested looking back at her might be a fatal mistake.

She circled the bus stop like a foul-mouthed, polyester planet and when she passed me again she had moved on to the subject of exactly what was happening to her.

She made another orbit and, as she returned, succeeded finally in catching someone’s eye.

This led to other people looking at her, a fact she effortlessly absorbed into her self-obsessed yodelling.

It came and she went upstairs. I stayed on the lower deck and felt old.

Labels: All Ears, bus, gang raped by badgers, mobile phone, steve may, the Guardian, We Will Rock You