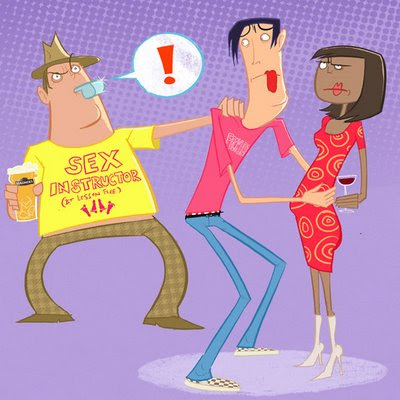 NB this illustration has been toned down for public consumption because the original was thought to be a bit rude for a Saturday morning - I'll maybe stick the rough version up if you're all very good boys & girls... x

(Article by Michael Holden)
On a boiling afternoon I tried to catch the breeze coming through the open door of a bar where outside drinking is forbidden. Other drinkers huddled into the microclimate, among them an expectant father and his friend.

Man 1 “I got there for the last two hours of the pre-natal thing.”

Man 1 “All day. There was no way I could handle that, so I came late. I’d only been there five minutes when I called one of the others a prick.”

Man 1 “They were talking about epidurals and painkillers when this bloke pipes up and says, ‘Why are we giving them so many drugs in childbirth? We’re breeding junkies!’ The woman in charge tries to tell him that’s not how it is but then he starts saying, ‘What happens in Africa, where they don’t have all these drugs?’ I said, ‘they die, you prick!’”

Man 1 “I think most people agreed with me. There’s a lot of thick people out there, having kids though. Another bloke, in his 40’s asks, ‘when you say they wake up every three to four hours, is that at night too?’”

Man 2 “Shame you can’t give ‘em the lessons before they have sex, might put ‘em off. It’s all well and good, these classes, but by the time these people have knocked each other up, the damage is done.”

And then the master race got back to their cider.