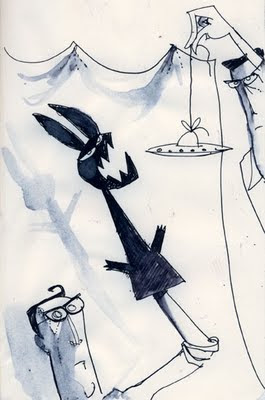 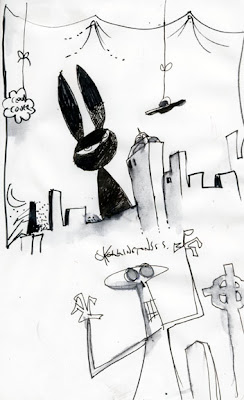 Some sketchbook nonsense based around my 'Rabbits' short 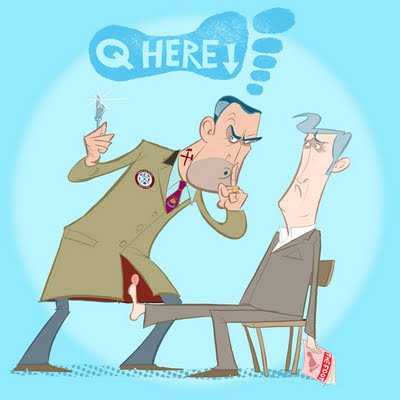 For me medical waiting rooms always beg a kid with a chamber pot stuck on it's head but I had to resist the temptation this week...might just go & draw a random one now!

(article by Micheal Holden)
I was stuck on a plane for an hour recently while the airport authorities searched for a bus to take us to the terminal. As codas to already unpleasant journeys go, it sucked. I did however get to find out all about my fellow traveller’s toenail.

Man 1 “I literally hobbled in there. You could see it was the foot place-there were a lot of people in sandals. Lot’s of toes in big white cocoons of bandages-the sort of thing you might see a silk moth fly out of.”

Man 1 “Exactly. So they ask me what’s up and I tell them it’s an ingrown toenail. I can’t walk, and in the end it’s got so bad I can hardly sleep. So they sit me down in this massive queue.

Man 2 (eager for details of institutional inefficiency) “And how long did that take?”

Man 1 “In the end this bloke turns up-quite serious looking, like a sort of gangster almost, He takes a look and says, ‘that is bad, mate.’ He says, ‘we’ll operate on Tuesday. We’ll take that bit off, we’ll destroy the root with chemicals and it’ll never grow again.”

Man 1 “ Apparently it’s that or a vicious circle of antibiotics. Anyway I’ve asked him if there’s anything they can do now and he sort of looked about to see if anyone was looking. Asked me if I was squeamish-I said no. Made me promise not to kick him-I said fine. And he just dug half the nail out with a scalpel there and then. I felt like screaming but I tell you what I walked out of there better than I walked in!”

Man 2 “And you still had the operation?”

Man 1 “Yeah, but they seemed a bit put out that the other guy had sorted me out first. One doctor said, ‘we don’t do that field hospital stuff here anymore-did he put a bit of wood in your mouth?’ I said, ‘No, but it was a bit Medieval.’ And then the other doctor says, ‘Well, he is West Ham.’ I said I don’t care who he is, it worked.”

Thoughtless for the day 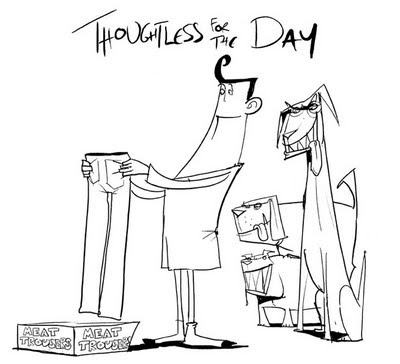 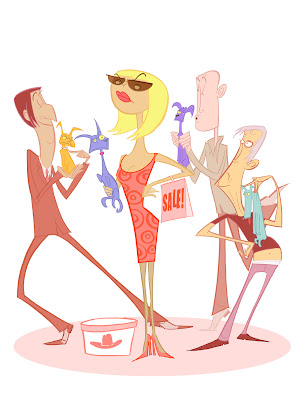 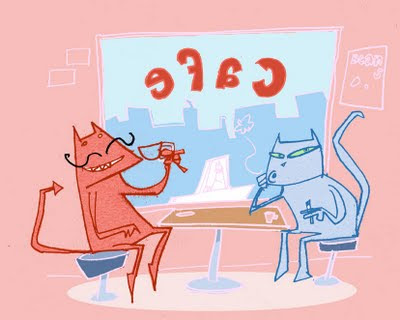 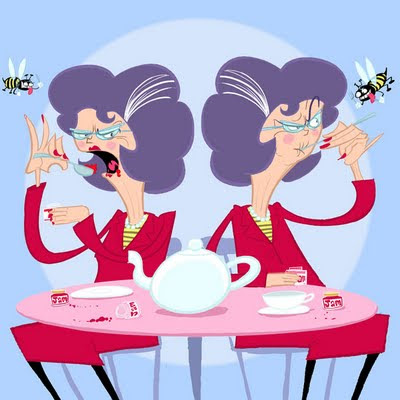 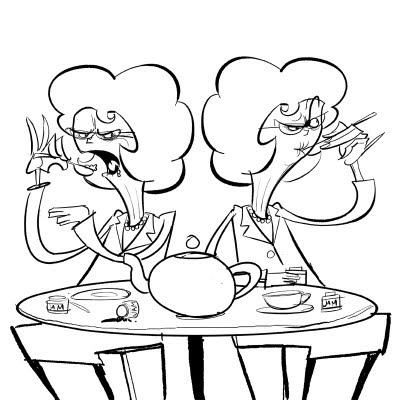 (Article by Michael Holden)
Outside a café I sat near a set of identical twins, women in their mid sixties, dressed alike and gearing themselves up for a duet of synchronized complaining that, had it been a piece of music, might have been eligible for some sort of prize.
Twin 1 (surveying the mild autumn sky) “This is my kind of weather…”
Twin 2 (staring moodily at the waiting staff) “What’s wrong with these people?”
Twin 1 “Did you ask for more jam?”
Twin 2 “Yes but she didn’t understand me.”
I looked at their table. They were eating scones and had what seemed to me to be an adequate amount of jam to be going on with.
Twin 1 (stopping a waitress) “We need more jam!”
The waitress smiled and walked inside.
Twin 2 “She won’t speak English. It’s the same in Waitrose.”
Another waitress appeared and gave them more jam.
Twin 1 (looking angrily at the tiny jars) “These have the lids on!”
Twin 2 “The others had the lids off!”
Twin 1 “It’s the inconsistency…”
She stopped a waitress and held out a jar.
Twin 2 “Can you open this?”
Twin 1 “It’s no good. They can’t understand you.”
The waitress took the jam and opened it.
Twin 2 “This is different jam altogether.”
Twin 1 “It’s the wrong jam!”
They now had no scones and a surplus of jam. A problem they surmounted by spooning it directly into the mouths while looking beadily about for trouble, like human wasps.

thoughtless for the day 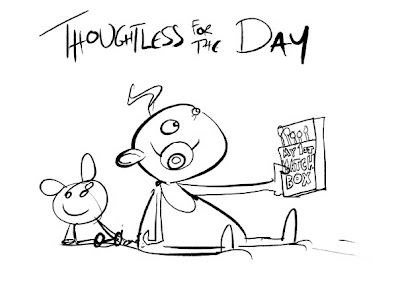